Over the last decade, many investment professionals have been tested by two simultaneously-occurring phenomena: the rise of passive investing and the stronger performance of growth stocks relative to value. 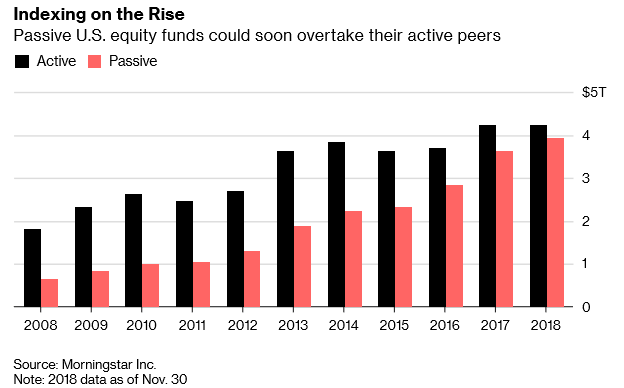 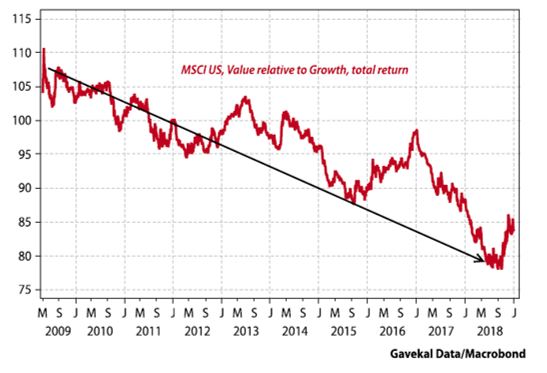 This has led some to question whether those enrolled in the school of Benjamin Graham and David Dodd (the forefathers of actively-managed value investing) would be better served dropping out or switching schools. Forbes even declared Warren Buffett’s Berkshire Hathaway history this week – history, in this case, meaning “relic” rather than “goner.” But, still. Even the inference is a lot arrogant if you ask us, given that Buffett has returned something like 21% per annum over 50 years. And while Berkshire’s portfolio was not immune from the global rout that shook markets at the end of 2018, the shakeup did much to confirm that value-based investing has just been waiting for its moment to reemerge from the shadows. As the chart below shows, during those cold wintry months when all hell was breaking loose (lest you forget), value stocks outperformed growth stocks by nearly 5%. 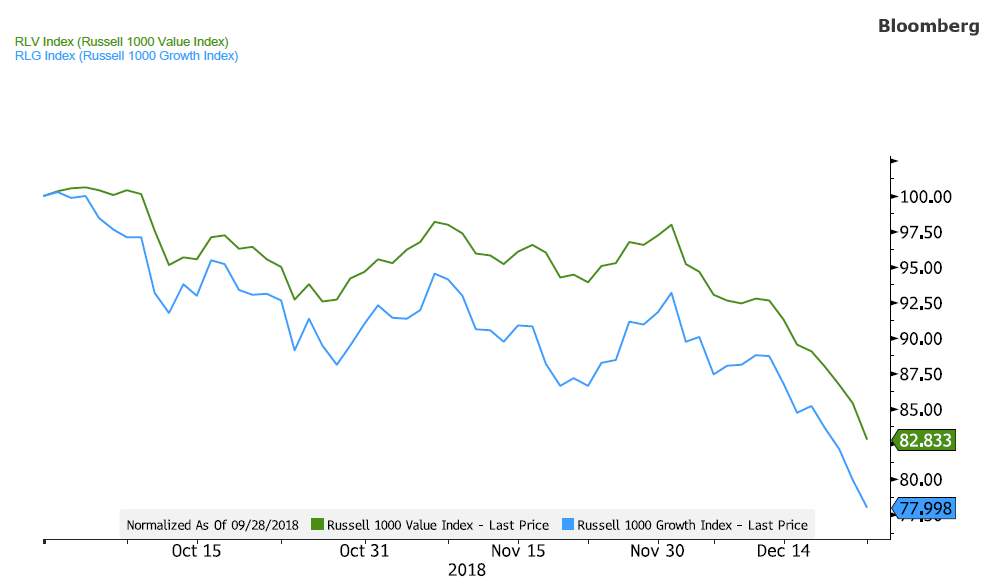 Since the Christmas Eve low, markets have recovered, and growth stocks have again started to outperform value. However, as this week’s newsletter from Evergreen Gavekal’s partner Louis-Vincent Gave points out, the market air pocket in late 2018 might be the coming-out party value investors have been waiting for. If he’s right, which we believe he is, it would be prudent to speak with an investment professional with an invitation to said party (cough, cough).

A FUTURE FOR VALUE INVESTING
By Louis-Vincent Gave

Financial theory teaches that, in order to determine the price of an asset, we should take its foreseeable future cash-flows, discount them by a risk-free rate to which we can add a risk premium, and then beyond these cash-flows ascribe a “residual value” to the business. So it’s an easy game—we only need to determine four things: the future cash-flows, the direction of the risk-free rate, the level of the risk premium, and the residual value. Who wouldn’t want to do this for a living?

Jokes aside, until a few months ago, the market in its infinite wisdom, had decided that:

As a result, the last decade has been characterized by a twin split in the market. Firstly, there has been a split between the US, where most of the companies with massive potential residual values are located, and the rest of the world. And secondly there has been the performance split between “growth stocks”, which were typically ascribed massive residual values, and “value stocks”, whose residual values were assumed to be either close to zero or even negative (for example because of the weight of unfunded pension funds, à la General Electric).

But is the environment now changing? One notable development in the recent market debacle has been the underperformance of the US equity market. There are many reasons this underperformance makes sense: the US equity market’s valuation was punchy relative to almost all others; the tightening of US monetary policy; the increase in US corporate leverage, which primarily funded financial engineering; the expiry of the “Trump tax cut” market put when the Democrats won the House of Representatives, etc.

Nonetheless, in big market routs (and the fourth quarter of 2018 was an ugly quarter by any standards) it is unusual to see the US underperform to such a degree. Usually in a storm, the US equity market is seen as a “safe haven”, if only because it is liquid, deep, and a big part of anyone’s benchmark. Yet in the fourth quarter of 2018, US equities underperformed markedly.

Take the recent underperformance of the US together with the recent underperformance of growth stocks relative to value, and one may start to ponder whether the long decade of misery for value investors may finally be coming to an end. In other words, will the markets stop putting a “zero” on the residual value of many of cash-flow-producing businesses, and “tens of billions” on the residual value of cash-flow-burning businesses? Has the Russ Hanneman era of “It’s not about how much you earn, it’s about what you’re worth” come to an end?

One possible explanation for this would be that growth in the tech space, which is the epicenter of the Russ Hanneman business model, typically followed one of three different paths:

Each path comes with its own challenges. But, in the later months of 2018, the market came to question the residual value of the “Apples” of this world. What if there is no next “big hit” product? What if the firm’s current leadership turns out to not be that visionary after all?

At the same time, the challenges facing the “Facebooks” have also become obvious. Firstly, the increased scrutiny of regulators means that any future acquisitions will likely prove more challenging. Secondly, the same scrutiny has triggered a derating of stock prices to the point where any future takeovers will be far less value-accretive. Using a stock on a P/E ratio of 15 to buy out someone is a very different proposition from using a stock on a P/E of 30.

This leaves the “let a thousand flowers bloom” business model as the only type of growth stock model to which one could still ascribe a very high residual value. But running such an organization is no easy feat. It involves accepting, and not punishing, failures. And it means constantly battling to avoid the creation of competing silos. Fail to do that and you end up being Sony: the company that in the mid to late-1990s had everything lined up to succeed yet ended up nowhere. Yet if you do succeed—as Amazon, Alibaba, Google and Tencent have shown—the rewards can be enormous.

Still, one of the lessons of the last quarter of 2018 must be that the days when investors indiscriminately applied a very high “residual value” to anything that seemed to promote creative destruction, and simultaneously applied zero residual value to any asset that might one day be negatively impacted by this creative destruction, have now come to an end. If, as I believe, this turning point has now been reached, then the rest of 2019 should be a whole lot less miserable for value investors than the past decade has been!