“Dear America, appreciate your allies – after all, you don’t have that many.”
-DONALD TUSK, European Union (EU) Council President on Tuesday

In March, Evergreen outlined our near- and long-term concern for an escalating trade war in The Trump Trade Tirade. Well, ladies and gentlemen, it seems as if the worst is coming to fruition.

Last Friday, no more than 48 hours after 4th of July fireworks stopped ringing, duties on $34bn of Chinese goods took effect. China promised to immediately impose retaliatory tariffs on a comparable size of US goods. In a move that some see as mere political posturing, President Trump suggested that the total number could eventually reach to the hundreds of billions – or exceeding the annual value of all Chinese goods exported to the US. 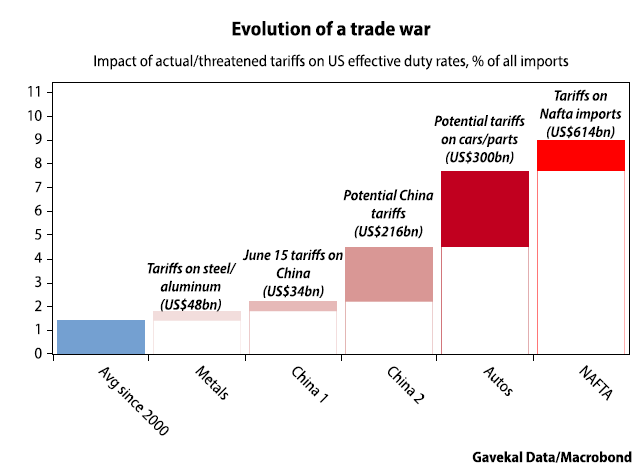 While we feel it’s unlikely Trump’s tariffs will be implemented to the degree shown above, all the back-and-forth and political jockeying is enough to make even the most level-headed individual question their sanity.

For those anticipating the impact of these tariffs will come further down the pipeline (i.e. when the numbers shown above reach the higher end of the spectrum), quantitative and qualitative indicators are already showing signs of weakening confidence in an economy who’s at war with its heavy-hitting trade partner. For example, as the Fed outlined last week, several industry contacts from around the country indicated that the war is already hurting US investment. And those in the good ole’ American heartland and coastal cities alike have already experienced direct business impact.

In this week’s EVA, readers have the opportunity to hear from Louis-Vincent Gave, a man with the unique pedigree of being raised in Europe, educated in the United States and China, and spending many of his working years in Hong Kong. As you will read below, Louis – who has also been dubbed the “Smartest Man in Asia”– has reason to be bearish on the economy and US dollar. Please enjoy hearing from Louis, a good friend and partner of Evergreen Gavekal.

Depending on commodity prices, in any given year China spends between US$250bn and US$400bn on imports of the “big five” commodities it needs to continue growing: oil, iron ore, coal, copper and soybeans. Before it can do that, it must first “earn” those US$250-400bn. Only then can it can turn around and buy the stuff the country needs to ensure its long-term growth. 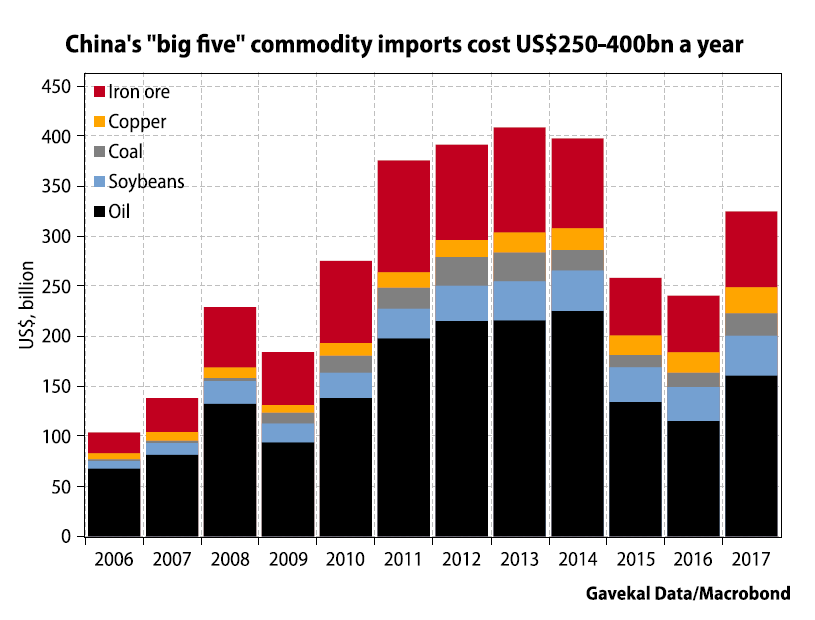 Today, however, the US president is busy signaling that China’s massive trade surplus with the US must drastically shrink, which means that China will no longer be able to earn the US dollars it needs through trade with the US. This leaves China in a quandary: on one hand, it needs a lot of US dollars, on the other, the US president wants to implement policies that prevent China from earning these dollars. What should China do? It has a number of options:

The only questions remaining are: Will the recent aggressive rhetoric from Washington, and the damage it has inflicted on the WTO’s foundations, now push China’s “de-dollarization” quest into hyper-drive? Or will China back off to avoid triggering an even angrier response from the US? In short, does Donald Trump’s protectionism now make the internationalization of the renminbi a national security imperative for China?

Extrapolating from this last point, it becomes clear that the two main questions confronting investors today are:

In the past, we have frequently compared reserve currencies to computer operating systems: once a majority of users have adopted a given system (Microsoft Windows for PCs, the US dollar for trade and commodity settlement), then it is very hard for any new market participant to displace that system. A wannabe new system can’t just be marginally better; it needs to be massively better to replace the incumbent.

By any objective measure, the renminbi is very far from being “massively better” than the US dollar. So, the only way the renminbi can make significant strides towards reserve currency status is if the US itself goes out of its way to undermine the US dollar. Increasingly it feels as if this is exactly what is happening today. Imagine for a second if Microsoft were to come out and say, “We don’t want to sell Windows to China anymore”, or if Bloomberg were to announce, “From now on, we will no longer sell our terminals to hedge funds”. Clearly, the value of these companies would immediately plummet, if only because the “network effect” from which these businesses derive so much of their intrinsic worth would be massively undermined.

Today, the US is effectively saying to the rest of the world, “We don’t want to give you US dollars any more”. To my surprise, most people view this statement as inherently bullish for the dollar. Their assumption is that people have no choice but to use the US dollar, and that the US trade actions will trigger a massive shortage. However, viewed from Asia, this statement strikes me as particularly bearish for the US dollar. If anything, it will accelerate the move away from the US dollar as the region’s sole trade and reserve currency. Once that shift has occurred, reversing it will be almost impossible.

* Note: The renminbi is the official currency of the People’s Republic of China.