“Could or would a state default? Not really―Illinois is probably in the worst shape, and there are states that I would avoid but basically the states are not going to default in Pimco’s opinion.”

1. The view that commodity prices are in a perpetual bull market continues to be heavily reliant on Chinese demand. Oil is a prime example of this, but China is aggressively attempting to lower the energy intensity of its economy. Over the last five years, China’s energy consumption growth rate has declined noticeably.

2. China’s push to forcefully ramp up its nuclear power production has received considerable press. India’s efforts, by contrast, have attracted much less attention despite its intent to spend $100 billion as it strives to raise nuclear-generating capacity from 4 gigawatts (enough to power four midsize cities) to 40 gigawatts by 2020. 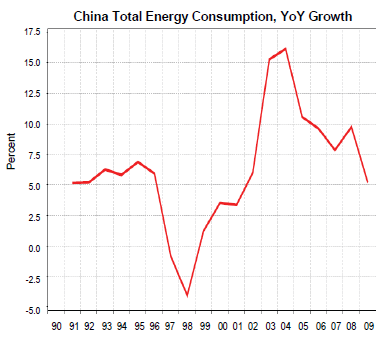 3. Nuclear power is not the only mega-trend in the developing world; wealth is also projected to expand with viral speed. Morgan Stanley is forecasting that in the next decade there will be more households in BRIC (Brazil, Russia, India, China) countries with disposable income over $10,000 than in the US and Europe combined.

4. Oil and gold prices have been on a decided upward trajectory throughout 2010. Speculative enthusiasm for both of late, however, has become extreme.

5. Ebullience is evident in the stock market as well, with short-term measures of sentiment revealing elevated levels of optimism. Yet, one cautionary aspect is that the number of stocks making new highs recently has deteriorated to just 431 versus 569 during the October rally and 674 at the April peak.

6. Due to the exponential surge in China’s money supply in recent years, land prices in some areas have jumped by 20 times and in the most overheated regions by 100 fold. Consumer prices, particularly food-related, have also soared, with a gallon of milk now costing $5.50 in Shanghai (versus an average monthly wage of just $350). 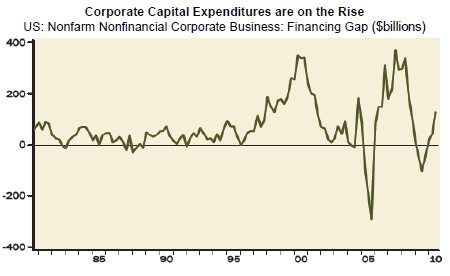 7. In another clear sign that corporate America is feeling more optimistic about the future, spending on capital equipment is gaining momentum.

8. Financial analyst Meredith Whitney, who accurately foresaw the banking crisis, caused a sensation with a recent “60 Minutes” interview predicting a debacle in the municipal bond market. However, fixed-income gurus such as Pimco’s Bill Gross have rebutted her views, noting the strength of most issuers and exceedingly enticing yields. 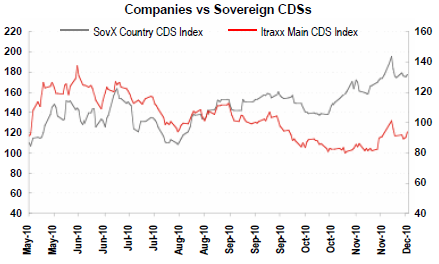 9. Like America, Microsoft is widely assumed to be over the hill. Its revolutionary Kinect gaming device, though, is the most successful consumer electronic product ever released at this stage of its life cycle. Daily sales of 100,000 units exceed even the iPad’s launch.

10. In another indication of the very real possibility that high-grade companies will be able to borrow less expensively than heavily indebted governments, it is now cheaper to hedge against corporate defaults in Europe than it is with sovereign issuers.

11. Barring a blockbuster plan to decisively deal with Europe’s many challenges, the situation looks harrowing. One credible source states that Portugal, Italy, Ireland, Greece, and Spain must reduce consumer spending by 15% for their debts to be serviceable. To put this in perspective, UK household expenditures contracted by 14% during WWII.

12. Not all the news emanating from Europe is adverse. Sweden, which drastically reformed its welfare state in the 1990s, continues to report robust economic data and is in a position to both cut taxes and raise spending. Even beleaguered Spain has reported that its budget deficit has fallen 46% from a year ago.

13. While US personal tax rates are relatively low compared to the rest of the world, that is definitely not the case when it comes to corporate taxation. An 85-country study by Price Waterhouse has shown that for every 10 percentage points of added corporate tax, a nation’s ratio of investment to output falls by 2.2%. 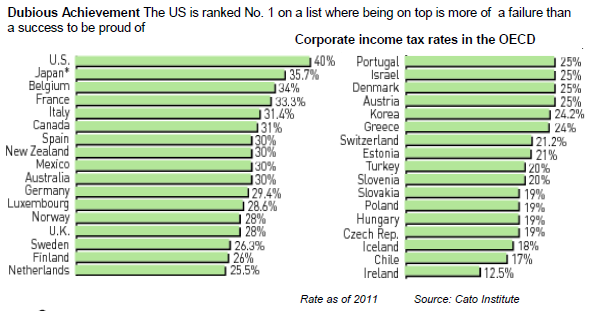 IMPORTANT DISCLOSURES: This report is for informational purposes only and does not constitute a solicitation or an offer to buy or sell any securities mentioned herein. This material has been prepared or is distributed solely for informational purposes only and is not a solicitation or an offer to buy any security or instrument or to participate in any trading strategy. All of the recommendations and assumptions included in this presentation are based upon current market conditions as of the date of this presentation and are subject to change. Past performance is no guarantee of future results. All investments involve risk including the loss of principal. All material presented is compiled from sources believed to be reliable, but accuracy cannot be guaranteed. Information contained in this report has been obtained from sources believed to be reliable, Evergreen Capital Management LLC makes no representation as to its accuracy or completeness, except with respect to the Disclosure Section of the report. Any opinions expressed herein reflect our judgment as of the date of the materials and are subject to change without notice. The securities discussed in this report may not be suitable for all investors and are not intended as recommendations of particular securities, financial instruments or strategies to particular clients. Investors must make their own investment decisions based on their financial situations and investment objectives.