“There is no squabbling so violent as that between people who accepted an idea yesterday and those who will accept the same idea tomorrow.”
-CHRISTOPHER MORLEY

It is odd how a single event can cause some notable leopards to change their spots. In this case, the election of Donald Trump has caused reverberations throughout the financial world, and some apparent self-reflection by several of the world’s leading thinkers.

For example, as investment newsletter All-Pro John Mauldin has pointed out, NY Times columnist and Nobel Prize-winning economist Paul Krugman was a vehement and constant advocate of big federal deficits prior to November. Yet he has recently become a deficit hawk, protesting the trillions in red ink that Trumponomics will presumably produce. Even some of the investing greats are quickly changing their tune. Ray Dalio of Bridgewater Associates, who has been a vocal advocate of Trumponomics and the fiscal stimulus it represents, has recently flipped sides, suddenly striking a far more cautious tone.

As Danielle DiMartino Booth points out in this month’s guest EVA, certain senior Federal Reserve officials have had similar attitude shifts. Prior to the election they were quite vocal in their reluctance to raise interest rates. Now, these same individuals seem to have reversed course and are sounding increasingly aggressive with a bias toward action. Not only is the Fed forecasting three rate hikes this year, it is simultaneously discussing shrinking its $4.5 trillion balance sheet.

The Fed’s balance sheet started at around $900 billion prior to the Great Recession. It has risen to today’s gargantuan proportions due to QE’s 1, 2 and 3 in which piles of financial assets were purchased to be held, possibly to maturity, by the Fed. For years, the Fed has rejected the mere idea of halting the reinvestment of principal and interest from these securities, much less entertain the notion of actually selling them. Today though, the Fed seems willing to not only raise interest rates, but to shrink its bloated balance sheet simultaneously. It’s almost like several Fed doves have done a “Volcker Mind Meld,” channeling the mindset of the famous Fed chairman who broke the back of inflation in the early ‘80s.

This 180 has not been lost on Evergreen and we have noted that this amounts to a possible double-tightening if they actually move ahead with both the hikes and balance sheet shrinkage. Danielle is the only other source we’ve seen that is specifically calling this out as a potential double-tightening.

Should this happen, which seems a distinct possibility, it will create some serious headwinds for the stock market and may well include some of the sectors that have benefited the most from Mr. Trump’s election.

In addition to the following Guest EVA, Danielle DiMartino Booth is the author of a new book, “Fed Up,” that challenges the wisdom of the Fed’s actions as it stared down the greatest crisis since 1929. As an advisor to what she refers to as the lone member of the FOMC to offer any pushback to the unconventional policies being proposed, she witnessed first-hand the indifference paid to the consequences such proposals wrought. In her own words, she “wrote this book to tell from the inside the story of how the Fed went from being lender of last resort to savior – and then destroyer – of America’s economic system.”

Up to this point, the financial markets have only seen the savior role that the Fed played. But as it attempts to normalize interest rates, and shed trillions from its balance sheet, a much darker appraisal may be handed down in the fullness of time.

The changing of the political guard in Washington shouldn’t overshadow some radical developments happening across town at the Federal Reserve, where it’s as if the doves have donned hawks’ feathers and flown the coop.

Consider Fed Governor Lael Brainard, who as recently as September was expected to dissent against a majority on the Federal Open Market Committee in the event they voted to raise interest rates. So, it’s difficult to conceive why four months later, in a January 17 speech at the Brookings Institution, she was open to not only boosting rates more rapidly, but in reversing the long-held doves’ policy stronghold of reinvesting the proceeds of maturing securities held by the Fed on its balance sheet into more bonds.

And yet, she uttered these words: “If fiscal policy changes lead to a more rapid elimination of slack, policy adjustment would, all else being equal, likely be more rapid than otherwise, with the conditions the FOMC has set for a cessation of reinvestments of principal payments on existing securities holdings being met sooner than they otherwise would have been.”

The financial markets have rightly shifted to “DefCon 1’’ in light of what they construe to be a threat to the de facto agreement that’s been in place between bond market participants and the Fed for almost three years: Don’t shrink the balance sheet and we won’t tank the bond market. Remember the “taper tantrum’’ of 2013 that roiled markets and sent bond yields shooting higher when then Chairman Ben S. Bernanke suggested the Fed could pull back from its bond purchases?

New York Fed President William Dudley has been the primary proponent of maintaining a large balance sheet, which has grown to $4.46 trillion. Dudley had the hawks fuming at the irony of his May 2014 comments that “delaying the reinvestment puts the emphasis where it needs to be – getting off the zero lower bound for interest rates. In my opinion, this is far more important than the consequences of the balance sheet being a little larger for a little longer.” 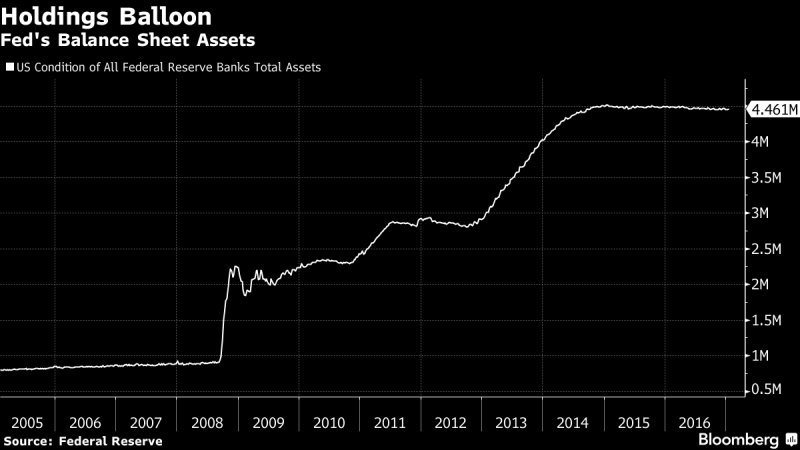 That watershed moment gave way to a new way of thinking about the aggregate supply of bonds in the market. If the Fed was capable of maintaining a large balance sheet via reinvestment while at the same time normalizing rates, one could begin to think of balance sheet holdings as permanently retired, expunged, extinguished. In time, the mindset would be that supply had been permanently reduced.

It’s one thing to be wholly data dependent; it’s another to hint that inflation could rise faster than anticipated; it’s yet another to suggest fiscal stimulus could open the door to a steeper path to normalization. But it’s anathema to cross a line in the sand that’s been established as firmly as any good gentlemen’s agreement. 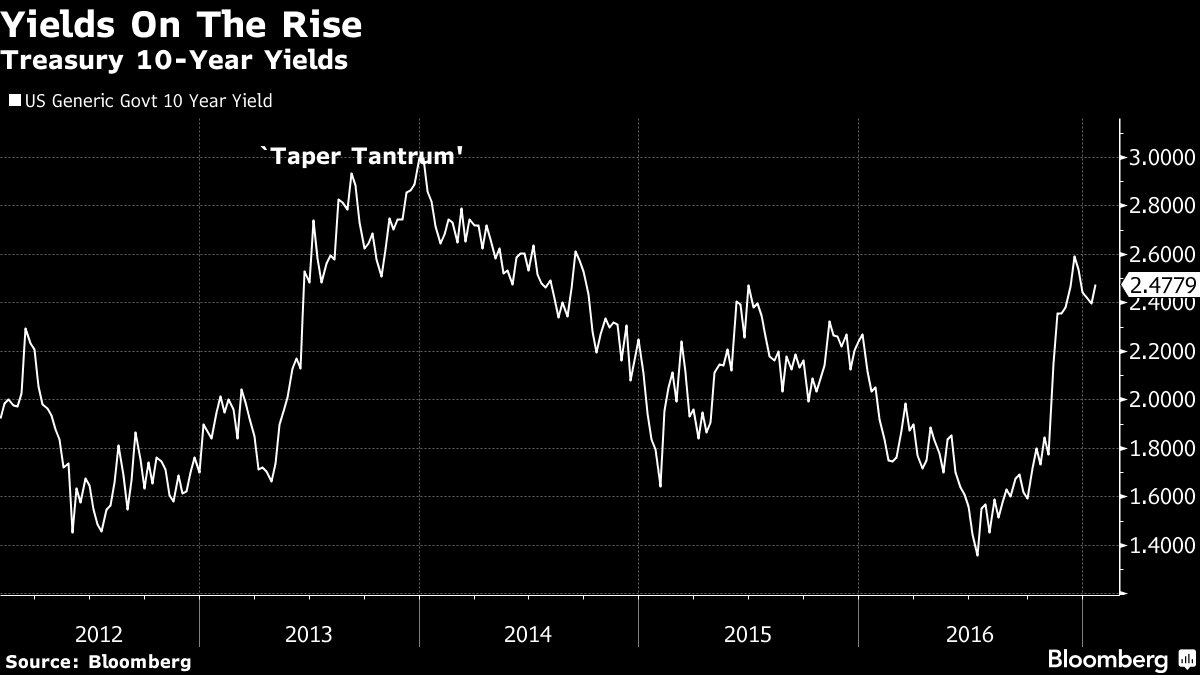 ”Reinvestment” is as fighting a word as there’s ever been when it comes to abruptly tightening financial conditions. Fed officials may as well open the door and invite in a recession given the current fragile economic expansion is at the precipice of being the third longest in postwar history.

Fed hawks are likely raging that the doves are talking about changing the supposed order of actions required to begin unwinding the era of unconventional monetary policy. Indeed, coercing the hawks into agreeing to successive rounds of quantitative easing entailed being in agreement that ending reinvestment would be the first order of business followed by normalizing interest rates.

The incoming administration and Congress should consider themselves warned of the dangers of doves in hawks’ clothing.

DISCLOSURE: This material has been prepared or is distributed solely for informational purposes only and is not a solicitation or an offer to buy any security or instrument or to participate in any trading strategy. Any opinions, recommendations, and assumptions included in this presentation are based upon current market conditions, reflect our judgment as of the date of this presentation, and are subject to change. Past performance is no guarantee of future results. All investments involve risk including the loss of principal. All material presented is compiled from sources believed to be reliable, but accuracy cannot be guaranteed and Evergreen makes no representation as to its accuracy or completeness.