“In the absence of the gold standard, there is no way to protect savings from confiscation through inflation. There is no safe store of value.”
-ALAN GREENSPAN

“Gold is money. Everything else is credit.”
-JP MORGAN

The 2018 Winter Olympic Games are nearly behind us, and so is the latest chase for the ultimate sports prize: a gold medal. For anyone keeping tabs on this year’s Olympics, only about 6g of each medallion is made from 24-karat gold, meaning the scrap value of that long-awaited prize is roughly $575 USD. (Although, the resale value of a winning medal could fetch a much higher price, as collectors have been reported to pay anywhere between $10,000 USD and $1.47M USD, depending on the value to buyers.)

While winning athletes competing in these games may not make their fortunes off of the scrap value of that tiny, shiny artifact, there could be a lot gained for the rest of us by investing in gold or gold-related securities. In fact, as the pages outline below, when comparing the relative price of gold to US stocks, gold is at its cheapest level in over 35 years.

We are the first to point out that going “all in” on gold is likely not a winning strategy; however, we do believe investing in gold and gold mining stocks provide a necessary hedge against inflation and a weak US dollar, and that current levels are attractive when compared to other asset classes. Due to these factors, here are four reasons Evergreen is “going for gold” in the first half of 2018:

1. Gold is a Hedge Against Inflation and a Weak US Dollar

As noted in last week’s Unexpected Outcomes EVA, central banks have created enormous asset price inflation as they’ve attempted to attain a 2% CPI rate by pushing trillions of dollars into the system. Additionally, wages have continued to rise due to a tight labor market with a historically low unemployment rate of 4.1%. Economists expect the labor market to reach a vise-tight unemployment level of 3.5% by the end of 2018 – barring a recession – which will continue to put upward pressure on compensation.

On top of that, the recent $1.5 trillion tax plan pushed through by the Republican-controlled legislature has both increased the take-home pay of most working Americans and encouraged employers to pay out one-time bonuses or raise wages even further for employees. The trickle-down (sorry, but I had to) effect is that with more money in their pockets, American workers may spend more, increasing the demand for goods and services and, in turn, pushing up prices.

The result of this scenario is that excess money in the system decreases the purchasing power of the good ole’ US dollar, putting pressure on instruments that do not store value as prices rise. In other words, if your assets are not keeping up with inflation, your hard-earned coin becomes less and less valuable.

Historically, one way to hedge against this phenomenon is to increase exposure to gold, which benefits from rising prices. Interestingly, though, when higher than expected (.3% vs. .2% median estimate) CPI data was released on February 14th, the price of gold declined temporarily before recovering. 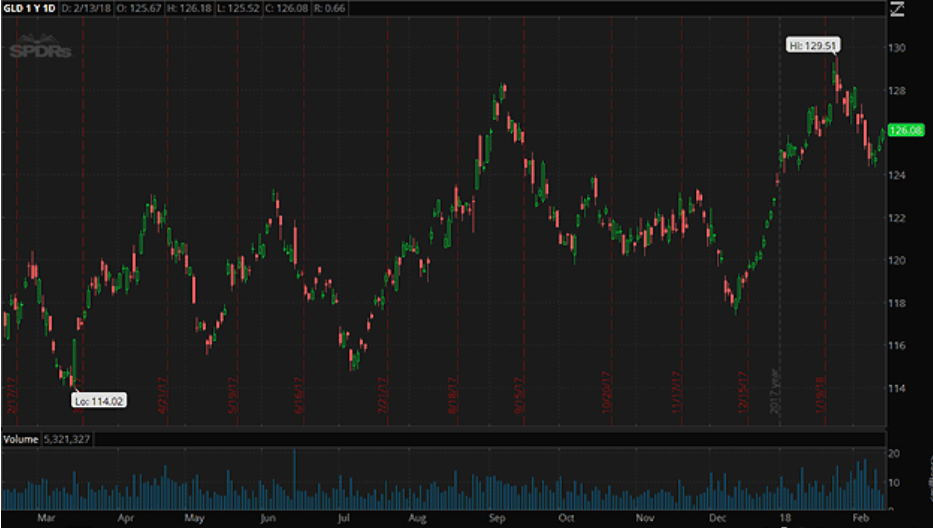 We believe this type of logic-defying response meant that gold could be bought at a discount and, if gold responds similarly in the future, buyers should be prepared to add to the safe-haven asset.

2. Gold and Gold Miners are Cheap Relative to US Stocks

It’s not just Evergreen that has been tooting the “this stock market is very, very expensive” horn for some time now. Robert Shiller, famed economist and 2013 Nobel prize winner, recently penned that “the lack of any clear justification for [the US stock market’s] high CAPE* ratio should remind all investors of the importance of diversification, and that the overall US stock market should not be given too much weight in a portfolio.”

One way to diversify away from expensive securities is to rotate money into assets that have underperformed on a relative basis over a similar time horizon. As shown below, the GDX (VanEck Vectors Gold Miners ETF) is a fund of leading gold stocks that has significantly lagged the S&P 500 over the last five years. 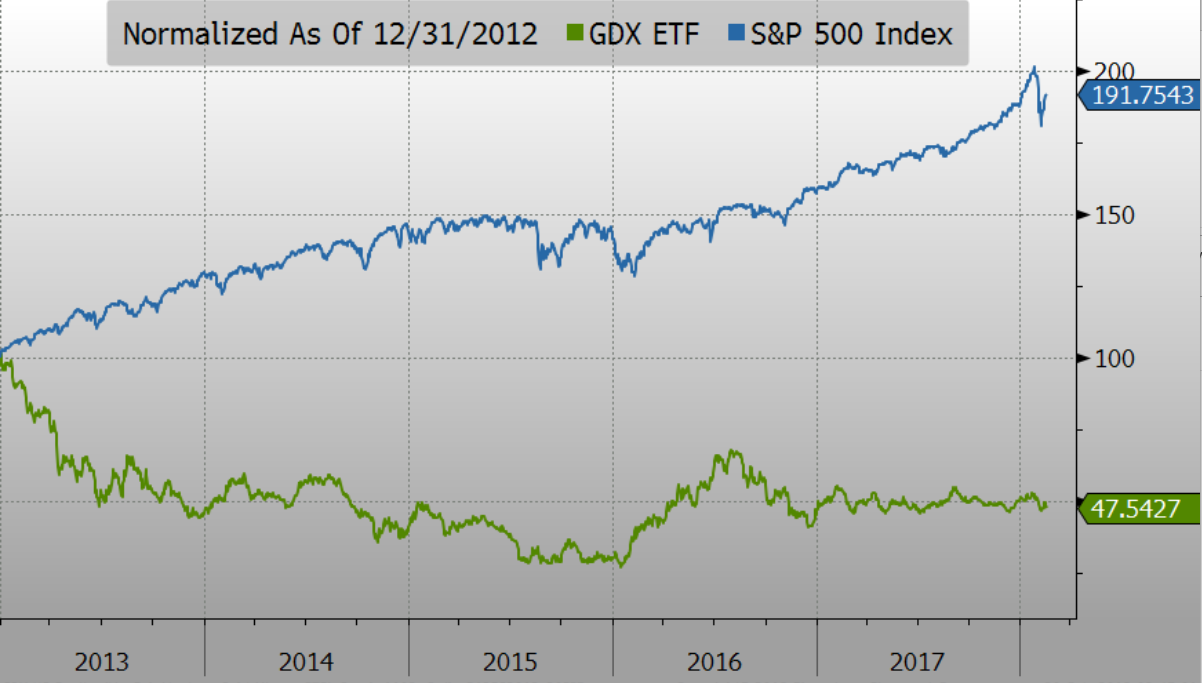 Perhaps even more compelling is that gold is now at its cheapest point over the last 35 years relative to stocks. 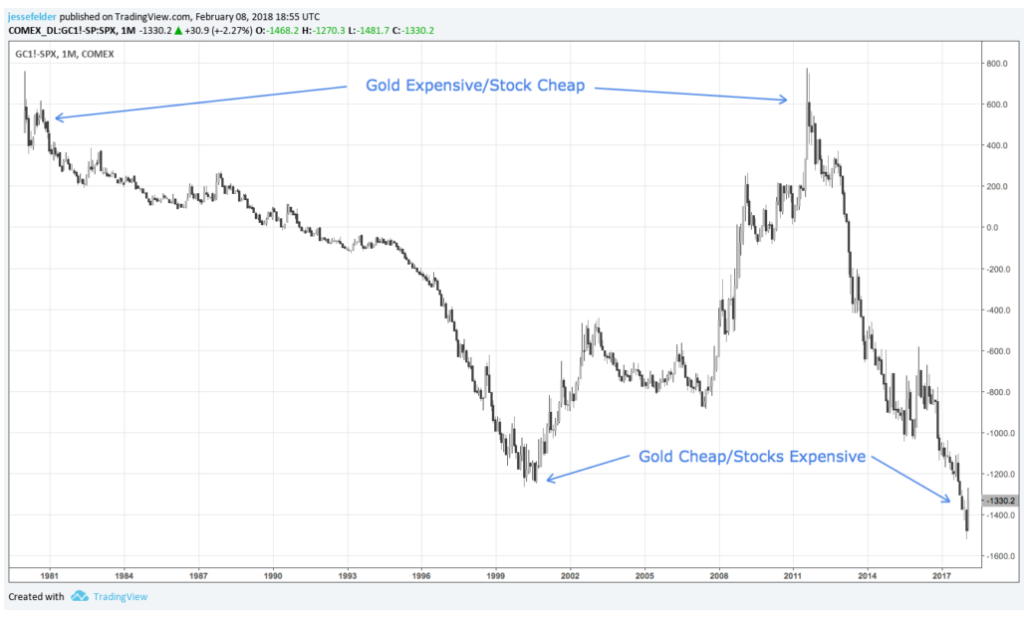 This factoid says a lot about the presently high valuations of US stocks, given that the price of gold was about $415/ounce in 2000, at the same point the tech bubble was at its peak. Today, the price of gold is roughly $1,350/ounce, and gold is even cheaper relative to US stocks.

Something we highlighted in our Bubble Watch EVA from late-December, was that we believed gold and gold miners would be poised for another early-year rally. These rallies have become common since 2014, with an average increase of 42%. (Incredibly, in 2016, gold miners even soared 143% by the third quarter before correcting.)

*As of Tuesday, February 20th 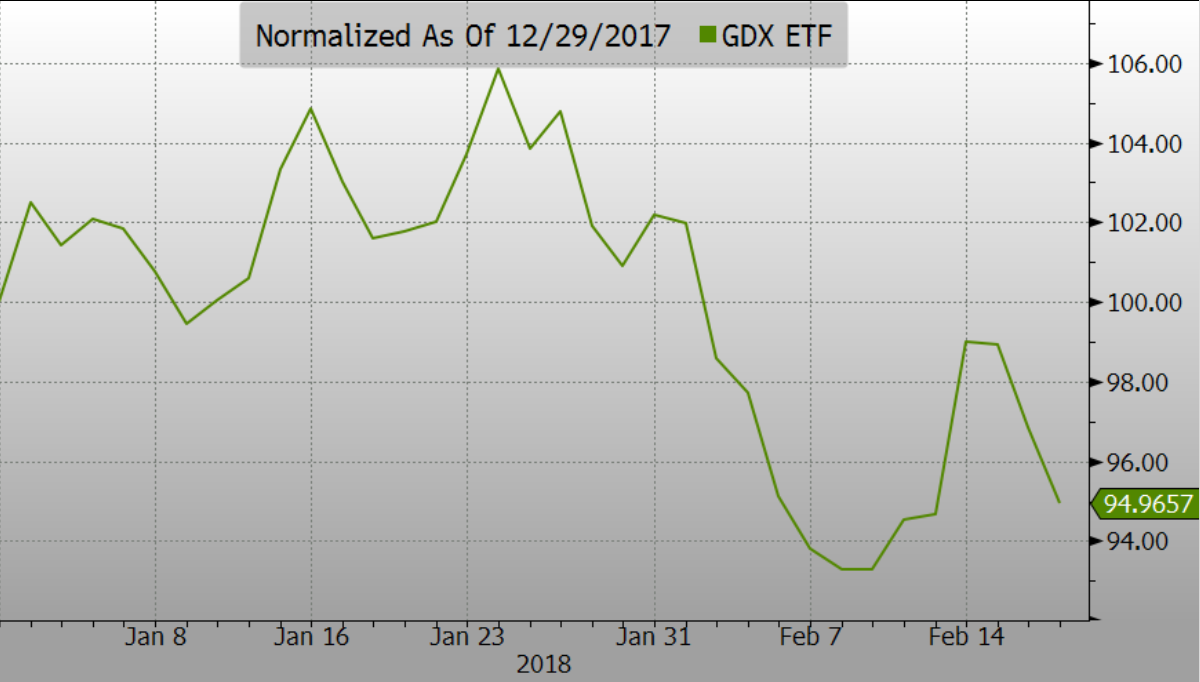 However, despite (or because of) this uninspiring performance, bullion and gold miner shares look cheap for the reasons we outlined in point #2, and we believe an early-year rally still lies ahead.

It’s no secret that Evergreen has been quite negative on the long-term economic impact of central bank policy in recent years. The fabrication of money from nothing and depressed interest rates have cheerily led most investors into an age of increased tolerance for risk pinned against speculation rather than driven by fundamentals.

As central banks look to reign in this exuberance by raising rates and offloading their balance sheets, we believe investors would be wise to consider a gold-backed hedge in case their radical policies end poorly.

In any sport, the key to building a winning team is to diversify skillsets and piece together a number of “assets” that complement each other. The same is true with investing. We believe that “going for gold” and adding gold or gold-related securities as a compliment to other investments is a wise play to hedge against inflation, a weak US dollar, and as central bank insurance. Additionally, we believe that current levels are attractive when compared to other asset classes and gold mining stocks are poised to outperform in the first half 2018.