“Inflation is when you pay fifteen dollars for the ten-dollar haircut you used to get for five dollars when you had hair.”
–SAM EWING, former Major League Baseball player

Inflation is a fickle measure influenced by several economic variables. Over the last 100 years, the rate of price inflation in the United States has swung wildly, from upwards of 20% in the early 1920, to -17% a few years following, to a steadier rate in the low single-digits over the last 35 years. 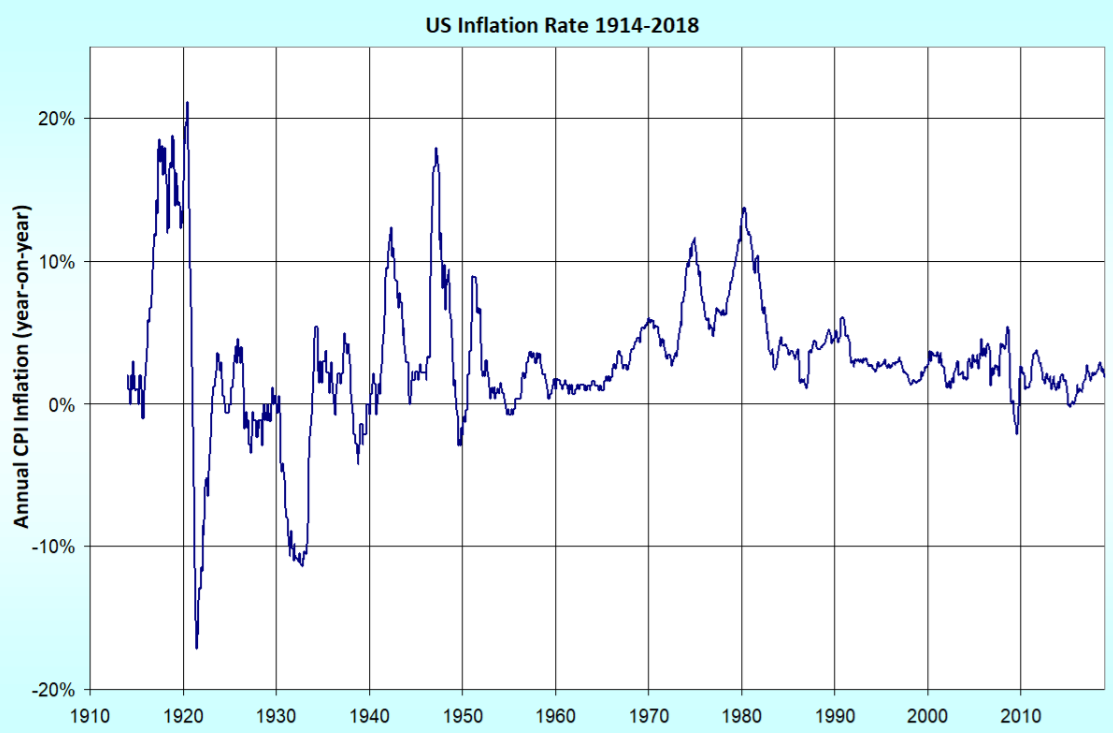 Today, most economists favor a low and steady rate of inflation with a benchmark of around 2%. Central banks have a key role in controlling this rate through the setting of interest rates and banking reserve requirements.

While inflation in the United States hasn’t accelerated to alarming levels since the late-1970s, as this week’s newsletter points out, the changing demographic picture could create a domestic and international wave of increased consumption, thus leading to higher rates of inflation.

The irony in this possibility is that retiring baby boomers, who are the demographic with the most influence over this trajectory, are the same demographic that would be most impacted by a sharp rise. The reason being is that if inflation rises, the purchasing power of cash would diminish, and a lifetime of hard-earned money could last shorter than originally planned. This, mixed with longer projected life-expectancies, would be a recipe for trouble. But more on that from Evergreen Gavekal’s partner Louis-Vincent Gave below.

This week, we’re also featuring a second piece from another friend of Evergreen, Gavekal co-founder Charles Gave. As you will read, he makes a not-so-popular claim: that this administration’s crusade to bring manufacturing industries back to the US by slapping tariffs on goods imported could very well be positive for US growth, living standards, and market outperformance.

Please leave your thoughts on both articles in the comments section. We hope you enjoy.

THE CASE OF THE MISSING INFLATION: THE CHANGING DEMOGRAPHIC PICTURE
By Louis-Vincent Gave

Imagine a society where everyone is a consumer and no one saves. In such a society, the competition to buy goods and services would be fierce, and prices would likely rise. Now imagine a society in which everyone saves a substantial portion of his or her income, and therefore “under-consumes”. In such a society, capital would be abundant (and so cheap), ensuring high (even excess?) levels of production, and a constant downward pressure on prices.

This is not just a theoretical exercise. The demography of most Western and Asian countries is set to change dramatically over the coming years. Take the US as an example. Every year from now on, some 3mn people will turn 70 years old. And while Charles would argue that 70 is the new 40, the reality is that at around that age, the direct contribution of most people to society shifts. From their 30s to their 60s, people are capital providers. Past 70, they become heavy capital consumers. 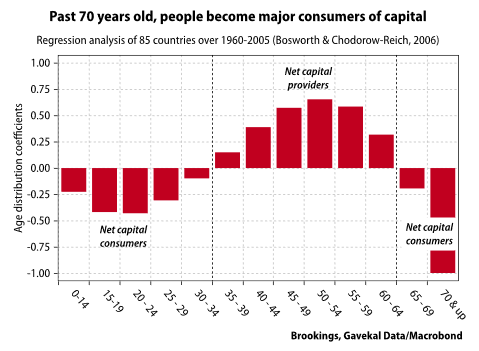 As the chart above illustrates, most people:

So, if we accept that in most countries most of the saving is done by people aged 35-64 years, we can come up with a “capital providers ratio”. This is a weighted coefficient of the numbers of people in the savers’ cohorts relative to the total population. For the world (or at least for the top 85 countries by GDP, which account for almost all global saving), the capital providers ratio looks something like this. 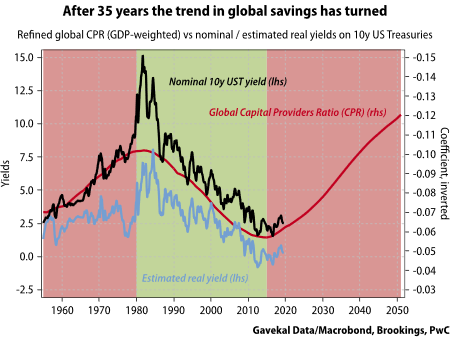 From the 1960s to the early 1980s, as the world went through the tail-end of the baby boom and the first boomers went to college and then joined the work force, there weren’t enough savings to go around. The global capital providers ratio kept on deteriorating (the ratio on the chart above is inverted). The competition for goods and services was fierce, and the world experienced a parallel rise in inflation and rise in the cost of capital.

By the early 1980s, however, the global capital providers ratio started to improve as the baby boomers hit their mid-30s in ever greater numbers. Contributions into pensions funds, 401(k) and savings accounts duly shot up. In the following years, the world as a whole “over-saved” and “under-consumed”. Inflation duly collapsed, along with interest rates.

Unfortunately, the world is now entering a new “dis-saving” phase, as the baby boomers start to live off their past contributions into 401(k), pension plans and the like. History suggests this phase is likely to be inflationary.

Of course, not every country shares the same demographic profile. Across emerging markets, a number of countries will continue to see improving capital providers ratios. But will China’s, India’s or Brazil’s excess capital flow to the US to fund excess consumption there? Or will it stay at home? 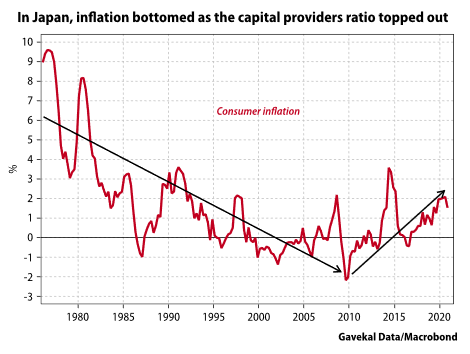 It is extremely unfashionable to say so, but Donald Trump’s campaign to bring manufacturing industries back to the US by slapping tariffs on goods imports may not be quite the act of economic illiteracy most professional practitioners of the dismal science would have you believe. On the contrary, it could well be positive for US growth, living standards, and market outperformance.

I realize this is a contentious statement, so please allow me to explain. Back in the very early days of Gavekal, we did a lot of research on a new form of corporation we dubbed the “platform company”. The idea was simple: every business has to do three things: design its product, build its product, and sell its product. These days, value is created by design or marketing. So, with the simultaneous emergence of the internet and globalization, it made sense for a bunch of US companies to get out of the low margin, capital intensive production business, contracting it out to China, and to concentrate on research and development and marketing.

In a world of perfect competition, this would not have been a problem. Except our world is far from perfect, and over the last 20 or so years these platform companies and their global supply chains have in effect become labor monopsonies; that is, they are the only marginal buyer of labor.

This means we are no longer in a Ricardian world of comparative advantage. Instead, we are in the sort of world described by the Cambridge economist Joan Robinson as long ago as 1933. Robinson showed that the emergence of labor monopsonies would lead to an unsatisfactory equilibrium, where most of the value-added went to capital, and only the crumbs to labor.

In a competitive labor market, each company has an incentive to bid up the wage it pays its workers in order to recruit and retain staff. This bidding war pushes up wages to the point at which the marginal cost of hiring new employees equals the marginal revenue a company can expect to generate by expanding its workforce.

In contrast, in a monopsonistic labor market, the sole employer has an incentive to cut costs by paying lower wages. The reduced pay pushes some workers out of the labor force, meaning the company earns less revenue. But fatter margins achieved by cutting costs more than compensate for its reduced revenue, pushing up profits, even though overall economic growth is slower.

This is the Robinsonian world we are in today. In almost every sector, the biggest three or four companies occupy a position of overwhelming dominance—much as in the time of Theodore Roosevelt, when he went after the US “trusts”.

Now, this situation is entirely at odds with the tenets of the law of comparative advantage, which is the intellectual basis for free trade. We all accept free trade as a “Good Thing”, because it is supposed to allocate labor and capital in the most efficient way possible. But if labor monopsonies start to arise on a global basis, then free trade will no longer guarantee an economic optimum—quite the reverse.

If I am right about all this, it is likely that the only way to restore a favorable economic situation at the national level is to tax away the excess returns that the monopsonies earn from their dominant positions. And the best way to do this is probably to tell them: “You can remain a platform company, but only if the production you contract out is contracted out at home.”

In short, companies that want to sell their products in the US will have to make their products in the US. And as they bring their supply chains back onshore, they will have to compete with other companies for labor. And because competition in the US labor market is so intense, such re-onshoring will help to restore the long-lost conditions of optimum economic growth, or at least something a lot closer to them (and eventually something similar could happen in Europe and China).

But bringing US supply chains back onshore will leave the rest of the world with huge productive overcapacity. Returns on invested capital outside the US will collapse, while ROIC* in the US will go up. Since financial markets are in the business of measuring ROICs around the world in real-time, we should expect the stock market in the US to outperform stock markets in the rest of the world. Sure enough, this is what we have seen since Trump introduced his first tariffs against China, on solar panels, on January 22, 2018, just four days before world markets hit their peak—a peak that non-US markets have yet to recover.

The conclusion is simple. The days of globalized platform companies are numbered. Supply chains are going to localize. Or more likely they will regionalize, with goods produced locally in three zones—North America, Europe and Asia—while shipping goods from one zone to another will become a great deal more difficult and expensive. 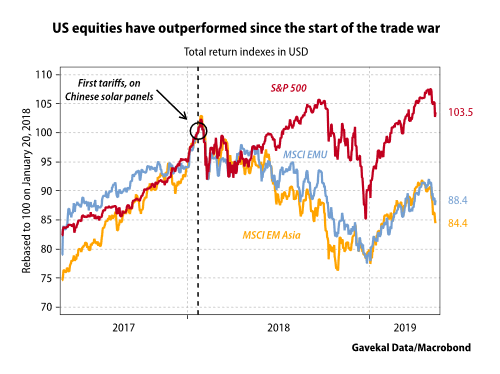