This week started on another low note, as US equities tumbled on weakness in energy and tech. On Tuesday, the S&P 500 temporarily slid 10% below its record September close, while the Nasdaq fell to nearly 14% below its August high. In an equity market that has skated by whimsically on the back of relaxed monetary policy and historically low interest rates for nearly 10 years, trouble has not oft been on the mind of the fully-invested, US-concentrated, passively-exposed, large-cap investor. It seems as if we might have reached a breaking point.

For those who follow some of the large financial publications and talking heads, the bravado and posturing of those expecting the longest bull run in history to continue running has unquestionably shifted in sentiment. Just take a look at some of the headlines that populated the financial media on Tuesday: 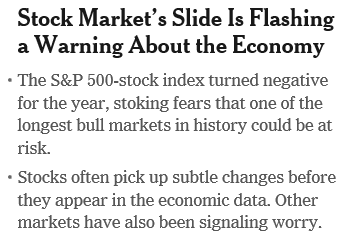 For those who, like Evergreen, have been on the skeptical side of the aisle during the late stages of this long run, it has been a lonely place to sit, playing defense, stress-testing portfolios, and waiting for value-based, sensible opportunities to reemerge.

In this week’s EVA, we are presenting an article published by Louis-Vincent Gave, a partner at Evergreen Gavekal and someone who has been dubbed the smartest man in Asia. As you will read, Louis makes his case for why global equity markets face an uphill battle under current economic, policy, and trade conditions. The question facing investors today is whether the recent crack in both US and global equity markets is a buying opportunity, or whether it is a sign of a much larger fissure still to come.

If you have followed our Bubble 3.0 series, you’re well aware that we believe the latter is a much more likely reality. However, for individuals invested in actively-managed and strategically opportunistic portfolios like Evergreen’s, challenging market conditions could bode fruitful for the patient investor. We further believe a year-end rally could occur, particularly for some severely beaten-down sectors, partially due to the two items Louis mentions at the end coming to fruition. If so, it will likely be a rally to sell into and then be prepared to buy.

THE UPHILL STRUGGLE FOR EQUITIES
By Louis-Vincent Gave

Last week saw the MSCI World turn in its sixth negative week (-1.51%) in eight, while the only sector to record gains over the last two months has been utilities; cyclical sectors like materials, industrials, IT, energy and consumer discretionary have mostly entered correction territory (see left-hand chart below). As Paulie from The Sopranos might have put it, the period since mid-September has been one that most investors would rather “give back to the Indians”. Failing that, there remains the question of what to do about equity exposure. Is this a dip to buy, or will the environment remain harsh?

Falling back on basics may help answer this question. Specifically, everyone knows that an equity price should be a stream of future earnings, discounted by an interest rate on to which a risk premium is tacked. In that respect, equities are a three-part equation whose components I’ll now review:

1. Future earnings
Until recently, it could be argued that US equities’ massive outperformance this year was squarely due to strong earnings. Sure, US profits were boosted by Donald Trump’s tax cuts, which helped fuel financial engineering and record share buy-backs. But, so what? At the end of the day, investors buy a stream of earnings and US corporates had been delivering in spades.

Yet, it is increasingly clear that US profits have stopped growing much faster than everywhere else (see right-hand chart below), which may explain why US equities have stopped outperforming. The question is whether earnings can pick up from here and drive equities higher. Based on the market’s response to recent company reports, the answer seems to be no—the likes of Google, Amazon and Apple have all released earnings that beat expectations, yet their stock prices have done poorly. More broadly, the Wall Street Journal recently noted that 161 companies in the S&P 500 recently announced better-than-expected earnings, yet saw their stock prices pounded.

Thus, if US equities are no longer going to rise on the back of strong earnings, can non-US markets pick up the slack? Certainly, the earnings of non-US firms should get a boost from a stronger US dollar and lower oil prices. At the same time, earnings growth in emerging markets and Europe in recent years have been driven by overall Chinese economic growth. And today, there are few reasons to think that China’s economy is set to re-accelerate. Combine that reality with uncertainties surrounding US trade, the roll-over in global ISM surveys, the fact that OECD leading indicators have gone negative, a possible structural downturn in global auto demand (linked to demographics and the rise of ride-sharing), and a roll-over in key real estate markets (US, UK, Canada, Australia, Hong Kong) and it is hard to get overly enthusiastic about the prospect for earnings growth in the rest of the world. And this brings us to the second component in the equity pricing equation:

2. Interest rates
Looking at interest rates across the G7+1 in 2018, the following can be noted about five-year government bond yields: they have fallen in China (almost to US levels for the first time since 2007); stayed flat in France, Germany and Japan; risen slightly in the UK; climbed sharply in Italy (for political reasons) and risen in the US. Looking ahead, it can be argued that Chinese yields will fall more, but the associated economic weakness would raise doubts about World ex-US earnings growth. Of course, the same could be said of US yields if US growth starts to disappoint and UK yields could revisit their lows on the back of a Brexit-induced recession.

The one country where a near-term fall in yields may boost equities is Italy, but this assumes some kind of budget deal between Brussels and Rome. Yet with European Parliament elections looming, the odds have to be for other European bond yields to rise; whether in France (following this weekend’s widespread anti-Macron “yellow-jackets” demonstrations); Greece where banks are making new post-2016 lows and protests are turning violent, or Spain, where the Catalonia situation is yet to be resolved. And this cheery thought brings us to the third element in the equity pricing equation:

3. Risk premiums
Anatole puts the recent drop in global equity markets down to higher risk premiums, stemming from the threat of a trade war, the Italian-European Union standoff and medium-term rise in oil prices. He remains upbeat on the grounds that oil prices have corrected, the Italian situation looks contained to Italy, and the upcoming G20 meetings may pave the way for a trade compromise. My concern is that these may be yesterday’s concerns, when the following loom:

Putting it all together, it seems as if we will need a policy change for global equity markets to make new highs. That would mean President Trump changing tack on trade (which would help reduce risk premiums), or the Fed loosening monetary policy (which would help reduce interest rates). Failing that, the equity price equation is likely to stay challenged in the coming weeks.