“You don’t see revolutions happening, they just occur, and I think we’re in a moment like that in financial history. The hard thing to measure is how much buying power is in these bulletin boards.”
– Bob Sloan, Founder of S3 Partners

DISCLOSURE:  Securities highlighted or discussed in this communication are mentioned for illustrative purposes only and are not a recommendation for these securities. Past performance is no guarantee of future results. All investments involve risk including the loss of principal.

When a Stock “Goes Viral”

YouTube, the popular online video-sharing company now owned by Alphabet Inc. (more commonly referred to as Google), was founded in the wake of the dotcom bubble in 2005. The company was a true trailblazer at the time, enabling content creators to host their work on a cloud-based platform that was instantly accessible to millions of subscribers around the world. The early success of YouTube as a go-to content platform eventually spawned the term “viral video,” which refers to a video that is viewed, shared, and reshared millions – if not billions – of times around the world.

The term “going viral” is particularly popular among Millennials and Gen Zers, who came of age in a time where any piece of content could instantly turn someone from obscurity into a star, or from a star into a superstar. There are so many examples of this phenomenon over the past decade-and-a-half that some people have even built entire careers on the ability to take someone or something “viral” on the internet. One of my closest friends is among those people. If you can believe it, he reports directly to the Chairman and President of the world’s largest record label and his entire (unbelievably high paying) job is to create “viral moments” for its roster of entertainers.

Until recently, the concept of taking someone or something viral was mostly reserved for content creators and influencers on platforms such as YouTube, TikTok, Twitter, Instagram, etc. However, last month, the phenomenon took on new life, as millions of users on Reddit and Discord effectively took this playbook to the stock market. Their mission: to band together and drive up the share prices of Wall Street’s most detested names through a historic and meteoric short squeeze.

In a modern-day coup d'état, the anti-elitist uprising seriously wounded several large hedge funds, forcing them to cover their short positions, as the share prices of several out-of-favor companies such as GameStop and AMC Entertainment surged. 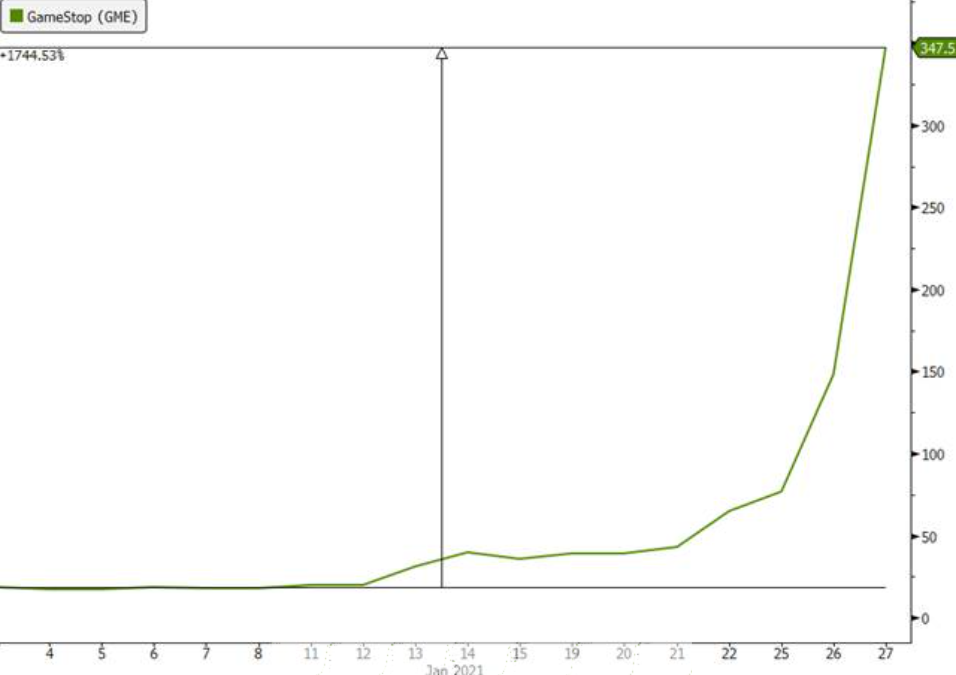 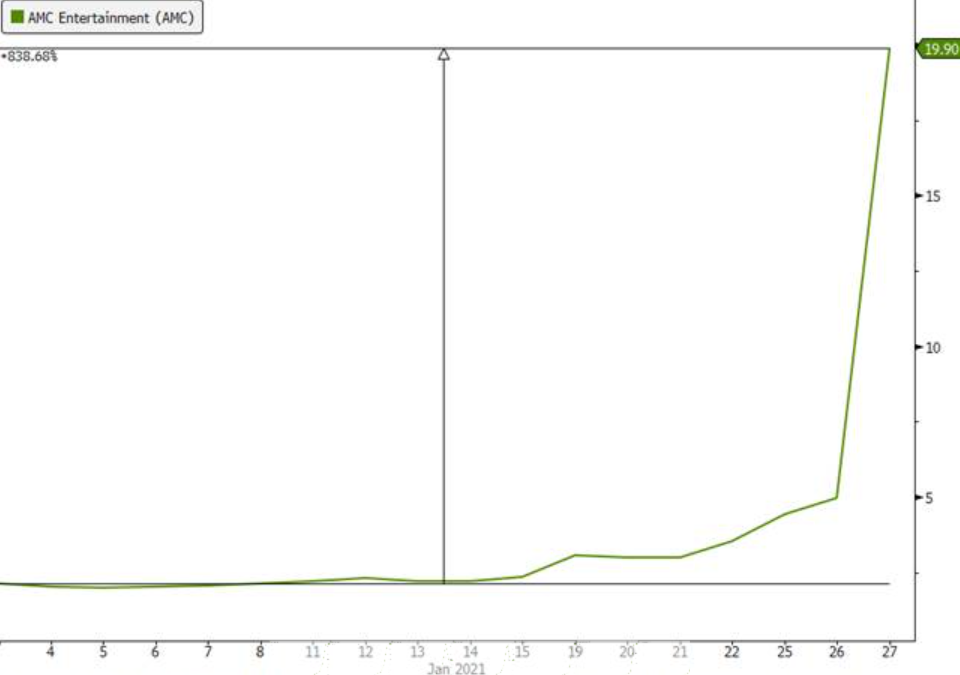 The blood bath was so brutal for Melvin Capital Management that its net asset value (NAV) fell a reported 53% in January and required two industry peers – Citadel LLC and Point72 Asset Management – to inject $2.75 billion in emergency capital into the hedge fund. But Wall Street’s hedge fund titans weren’t the only ones who experienced the wrath of the “Reddit Rebels” during the unprecedented short squeeze. Robinhood – a popular trading platform – suffered extreme blowback after it halted trading in GameStop, AMC, and other securities.

During the initial mania, new users on the app spiked sharply as retail investors sought a way into the action. But, in the midst of the frenzy, it was revealed that Robinhood routes more than half of its customer orders to Citadel Securities, a market-maker owned by billionaire Ken Griffin. The kicker? Griffin also owns the hedge fund Citadel, which provided $2 billion in bailout funds to GameStop short-seller Melvin Capital Management. As you can see in the chart below, the app’s popularity took a nosedive as a result. 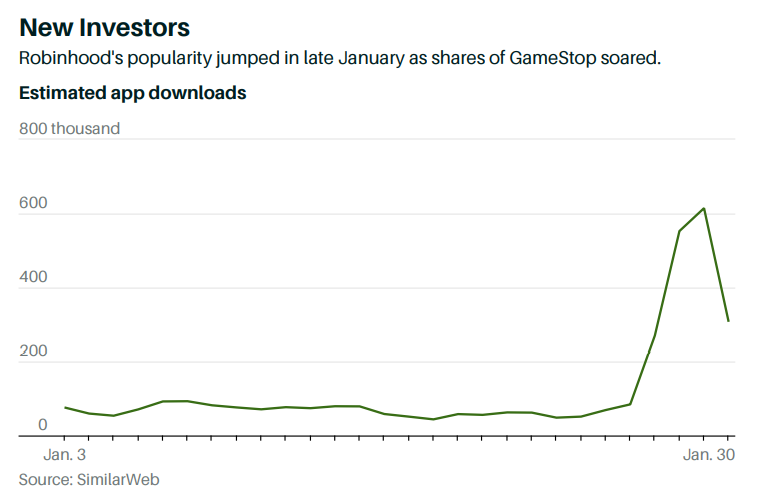 If you think this is the kind of storyline that would pique the interest of Tinseltown’s filmmakers, you’re spot on. It has been reported that Hollywood is already planning two new movies on the GameStop saga. However, the films will surely have a much different (and unhappy) ending than originally assumed. Channeling an updated chart that David Hay ran last week in his piece on the subject titled, “When YOLO Meets FOMO,” the combined market cap of GameStop, Bed Bath & Beyond, AMC, Koss, and Blackberry has plummeted -70% from its high during the heat of the hysteria.

Unfortunately, as brutal as the short squeeze saga was for some of Wall Street’s hedge funds, the cratering was equally devastating for many of the retail investors that bought towards the top of the wild run, only to have their brokerage accounts decimated in the ensuing weeks. 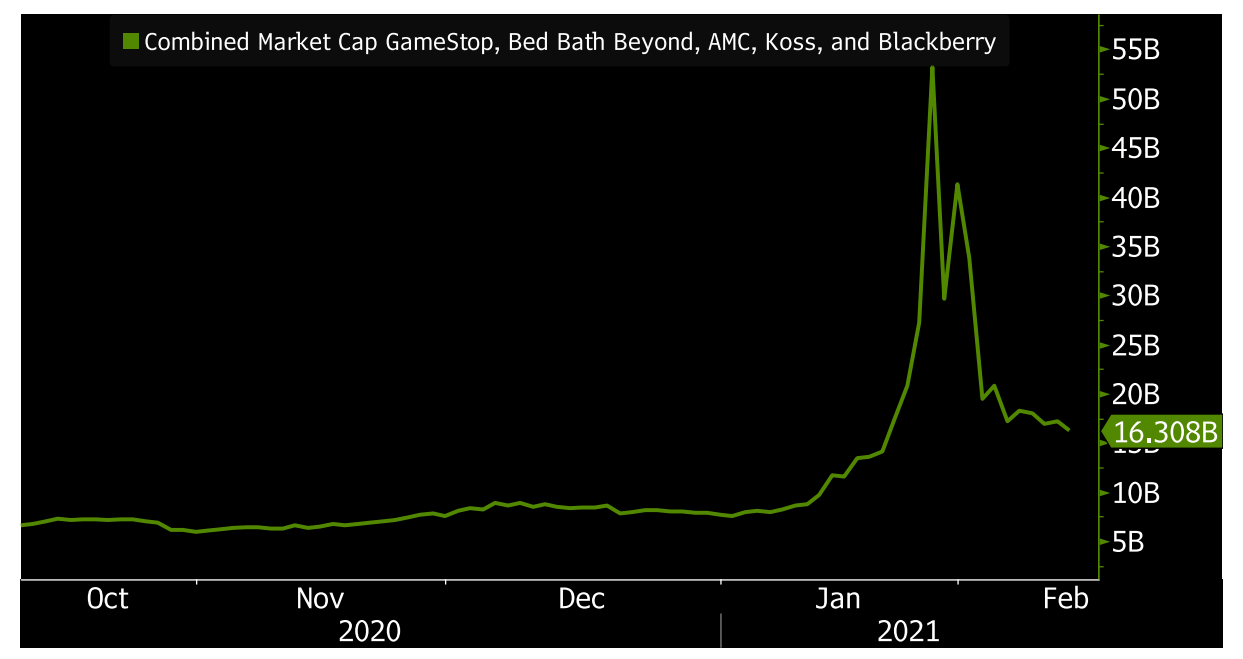 Did Reddit Rebels “Break the Stock Market”?
Another popular term among Millennials is “breaking the internet.” It essentially refers to a piece of content – whether it be a video, picture, meme, tweet, etc. – that is so viral that it circles to nearly every corner of cyberspace.

Last week, newly-appointed Treasury Secretary Janet Yellen held a meeting with US financial regulators to assess the carnage from the GameStop saga and determine what – if any – action must be taken by regulators. As Will Denyer from our partner firm Gavekal put it last week, “there is unlikely to be a Dodd-Frank type response to this episode, but a new administration may be motivated to act decisively.”

Specifically – and not surprisingly for anyone who has been a close follower of this newsletter – the Federal Reserve is receiving a lot of attention as one of the main perpetrators of the meme stock mania. As the Wall Street Journal’s Homan Jenkins, Jr. stated, “Only the Federal Reserve has enough money to detach prices from underlying reality indefinitely.”  Albert Edwards, Global Strategist at Societe Generale, also put the blame squarely on the shoulders of the Fed, asserting: “The Fed should hang its head in shame (for presiding over)…a retail mob feasting off each hedge fund kill.”

Similarly, The Financial Times ran an article by John Plender at the end of January with the apt headline: “GameStop is just latest sorry case of misallocated capital.” In Evergreen’s opinion, this is one of the overarching aspects of the entire casino environment that the Fed has engineered.  Trillions and trillions of very poorly – even horribly – allocated capital.

The silver lining in the storyline is the re-equitization of some out-of-favor securities at very favorable prices. AMC Entertainment sold 164.7 million shares (about $500 million) into the nuttiness at first, then another 44 million shares as the frenzy continued. Silver Lake and others were able to convert $600 million of bonds into equity, too.  These sales lowered the short interest down to 11.5% as of 1/25.  Thus, these companies will likely avoid bankruptcy, hopefully saving many jobs.

But the Reddit Rebels missed the fact the price explosion they caused – which was aimed at an elite group of hedge funds – created massive supply from corporate insiders who were able to realize enormous gains. Just as foolish was all the cheerleading of these short squeezes, egging on others to join in on the short-lived party (see screenshots below that were posted on Reddit’s now-infamous r/wallstreetbets). 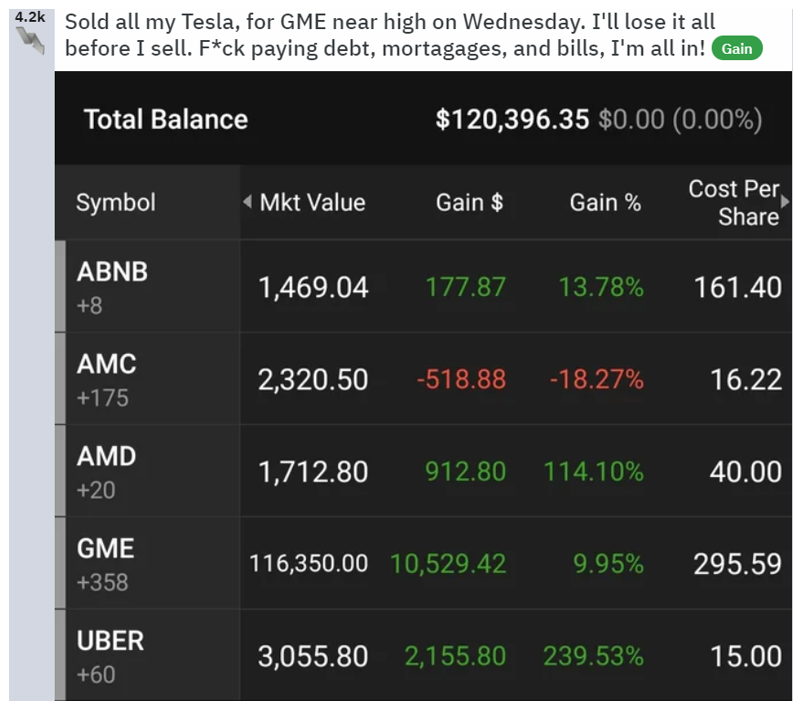 Once the shorts were squeezed out, who else was going to buy at those inflated prices? Unfortunately, mostly day traders who bought into hype that was being spewed on corners of the internet like Reddit’s r/wallstreetbets. Incredibly, but not surprisingly, membership in that community has experienced exponential growth recently, with the number of members rising from 1.75 million on January 1st to almost 9 million degenerates (their label, not mine) as of Tuesday. 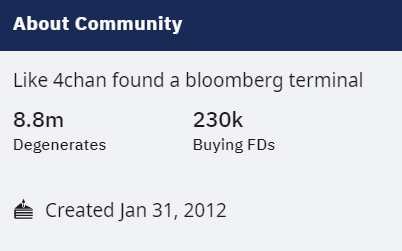 Even more incredibly, according to a new survey from Yahoo Finance and The Harris Poll, 28% of Americans bought AMC, GameStop or other viral stocks in January, underscoring just how widespread the madness became.  (However, there likely was overlap among these purchases by the flash mob crowd; thus, the percentage of participation was probably somewhat lower.) 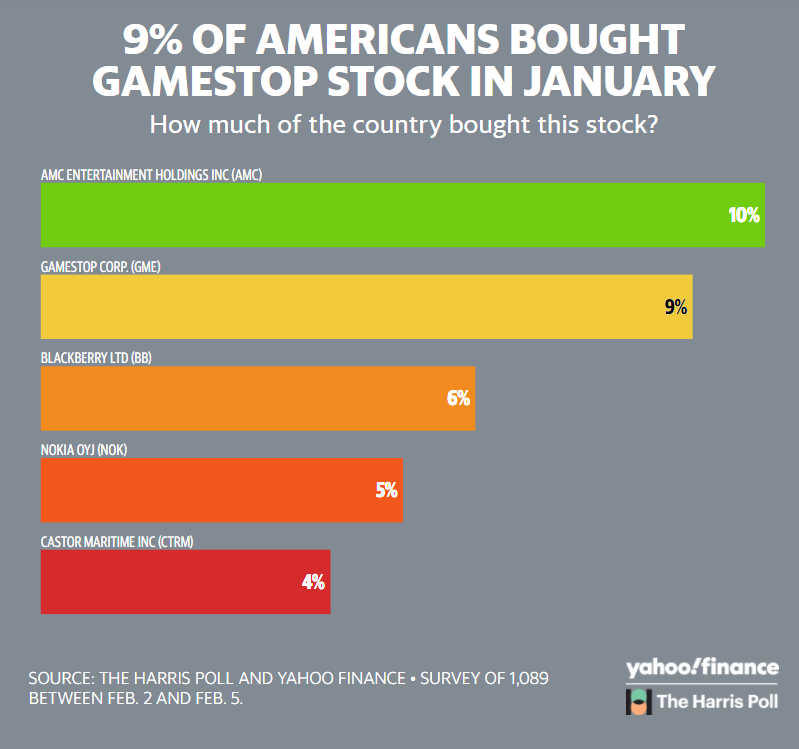 Beyond Market Madness
Stocks like GameStop and AMC aren’t the only assets that have experienced a wave of virality lately. The fringe cryptocurrency dogecoin (DOGE) soared more than 55% on Sunday after Elon Musk and Snoop Dogg sent a flurry of tweets endorsing the speculative asset. Kiss bassist Gene Simmons even jumped in on the action, which pushed the coin as high as the seventh most valuable cryptocurrency in the world based on a market cap of nearly $10 billion. (Not bad for an asset that started as an absurd joke between two engineers in 2013 based on a doge meme.) 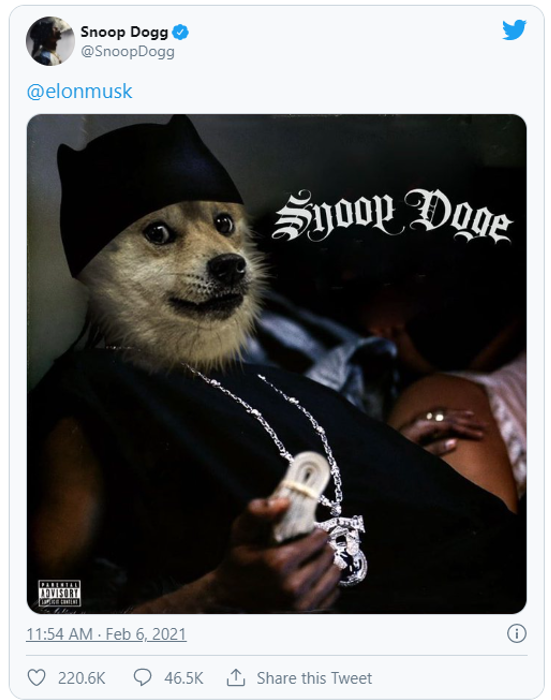 But even long-time crypto bulls, such as Castle Island Ventures’ Nic Carter, have stepped in and warned that such action is “disconcerting” and that the coin is “mainly used as a vehicle for speculation.” Mr. Carter even went so far as to assert the following:

"Unfortunately, a lot of retail punters are going to lose money on dogecoin in the long term because there's really not much there in terms of interesting technology… The only thing it can really do is be zombified and stick around and be an empty shell for people's expectations and for their entertainment."

If you’re thinking that the same statement could have easily been applied to the handful of stocks that skyrocketed before falling back to earth last month, you’re spot on. In an era of instant gratification, moonshots have created a culture where speculators pursue fast, near-term results without a full investigation of potential risks.

So, to sum things up: the next time you see a stock or asset “go viral” and are tempted to ditch your wits for a short-lived ride, don’t be lured into the mania. The regrettable individual who dumped his entire dental school credit line into GameStop would tell you that wild rides based on a false sense of optimism rather than fundamentals almost always ends poorly. Instead, remember the mantra that nothing worth having (or owning) comes easy and that maintaining a long-term mindset is always advisable in the unpredictable game of investing.

Note from Evergreen: If you or a loved one need help managing money during increasingly speculative times, please reach out to info@evergreengavekal.com. We are here to help clients preserve and grow wealth by investing in securities that have been analyzed by our internal research team and investment committee.