“The big bad wolf is dead and gone, and there is no danger on the path. Still scared, the little girl hugged her grandmother. Oh, what a dreadful fright!.”
– Little Red Riding Hood

During the first quarter of 2021, one of the hottest topics in financial circles was the sudden rise in bond yields. As a result, analysts and pundits from around the financial world pontificated as to whether this sharp spike would derail the bull run in equity markets. Despite several gut punches in February and March – particularly to the tech-heavy Nasdaq – equity markets have continued to extend past all-time highs, shrugging off concerns about rising yields.

In this week’s newsletter, Anatole Kaletsky, from our partner firm Gavekal, joins with the consensus chorus of pontificators, opining on why rising bond yields likely won’t significantly derail the bull market in stocks.  In Evergreen’s opinion, he’s probably right…unless the US 10-year T-note rises much past 2%. In the meantime, the steeply sloped yield curve is highly beneficial for US banks, along with falling loan losses as the economy recovers.  Thus, financial stocks may continue to run notwithstanding their muscular performance over the past six months.

Interestingly, this topic is something we wrote about in September 2018—namely, that of all the bubbles we’ve seen in recent years, the biggest is in bonds.  Because of the asset levitating impact of eradicated interest rates, this in turn has produced most, if not all, of the other speculative excesses seen throughout what we have dubbed Bubble 3.0. For those who joined us along our Bubble 3.0 journey (which concluded in May, 2020), Evergreen’s Chief Investment Officer, David Hay, is preparing to novelize the numerous EVAs he wrote starting in late 2017 on the continual series of manias and other market absurdities we’ve seen in recent years.  There have been so many he now things he needs to rename his book Bubble 33.0!  To our interested readers…stay tuned!

For the past two months, financial analysts all over the world have been obsessed by two closely related questions: (i) How much further will US bond yields rise, and how fast? (ii) Will rising bond yields kill the bull markets in global equities and other risk assets?

The markets have now settled the second question, with what always seemed to me the most likely answer. Equities have continued to hit new records despite rising US bond yields—or because of them. This makes sense, because what is pushing up bond yields is the prospect of strong economic growth in the next two years, combined with a once-in-a-generation regime change in global economic policy. While these two developments are bad news for bond investors, they bode well for corporate activity and profits in the years ahead. With central banks everywhere anchoring the short end of their yield curves at zero, it makes sense for stock prices to keep rising at least until valuations exceed the peak multiples of previous bull markets—and certainly until equities are more expensive than they are at present relative to bonds.

Which brings me back to the first question: how far and how fast will bond yields rise? Suppose that after doubling in the first quarter from 0.9% to 1.7%, 10-year US treasury yields were to double again in the next few months to 3.5%. This would represent a dramatic tightening of financial conditions that would hurt global economic prospects and hit corporate profits. But what is the probability of another surge in bond yields comparable to the first quarters? In my view, the answer is near-zero this year, and low in 2022.

I say this in full knowledge that bond yields are still “far too low,” even after the recent doubling. I have long argued that the global bond bubble, with more than US$13trn worth of global bonds trading on negative yields, is by far the biggest and most extreme speculative bubble the world has ever seen. Despite this, there are two reasons why bond yields will rise only very slowly, with a return to “fair value” likely to take a decade or more.

The first is that governments and central banks have strong means and even stronger motivations to ensure that the bond bubble deflates slowly, instead of bursting suddenly. The motivations are the need to limit debt servicing costs, to keep economies growing and to avoid financial instability, or at least to postpone it for as long as possible. The means are quantitative easing plus various forms of financial repression whereby regulators can force financial institutions and banks to buy “risk-free” bonds even when these investors are guaranteed to lose money.

The second reason for confidence that the bond bubble will deflate slowly instead is that the most active participants in government markets do not give a damn about the negative returns guaranteed to long-term bond investors, since they buy bonds for short-term trading profits and yield-curve carry. Because of the interaction between these short-term players and carry traders with central banks indifferent to “fair value” losses, and pension and insurance funds that can pass on to customers the negative returns on their “liability-driven investments”, bond yields are relatively easy for governments to manage and control.

The upshot is that bonds are likely to stabilize for a considerable period in a new trading range that will remain much lower than would seem to be dictated by “fundamentals,” despite the fact that almost every economist and financial analyst believes (rightly) that bond yields must ultimately move much higher. Last month, I thought (wrongly) that the top of this trading range might be around 1.5%. Now it looks as if the ceiling may be 1.75%. But perhaps it will be as high as 2%, or even 2.25%. Whatever turns out to be the top of the new trading range, if US 10-year yields stay below the ceiling of 3% that has held since 2011, they will not be a major hurdle to higher equity prices. When the bull market dies, as it surely will someday, it will be killed by a turn in the economic cycle or a crazy upsurge in equity valuations, not by the yield on US bonds. 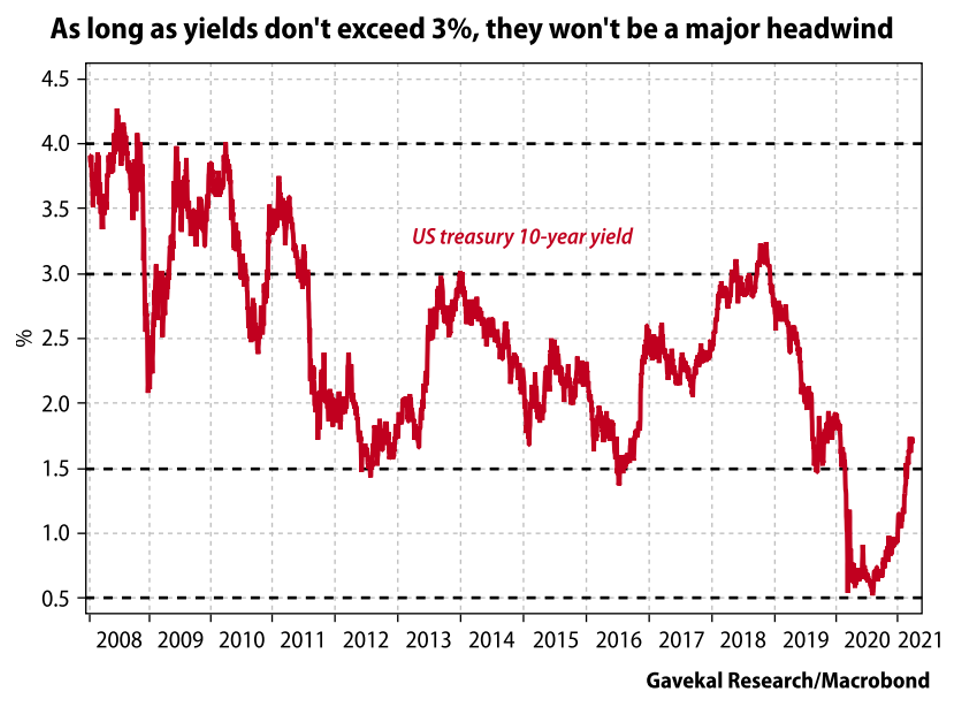 DISCLOSURE: This material has been prepared or is distributed solely for informational purposes only and is not a solicitation or an offer to buy any security or instrument or to participate in any trading strategy. Any opinions, recommendations, and assumptions included in this presentation are based upon current market conditions, reflect our judgment as of the date of this presentation, and are subject to change. Past performance is no guarantee of future results. All investments involve risk including the loss of principal. All material presented is compiled from sources believed to be reliable, but accuracy cannot be guaranteed and Evergreen makes no representation as to its accuracy or completeness. Securities highlighted or discussed in this communication are mentioned for illustrative purposes only and are not a recommendation for these securities. Evergreen actively manages client portfolios and securities discussed in this communication may or may not be held in such portfolios at any given time