“Google has too much power and they’re using that power to hurt small businesses, stifle innovation, and tilt the playing field against everyone else. It’s time to fight back. That’s why I have a plan to breakup Google and the other big tech companies.”
–ELIZABETH WARREN, Democratic candidate for president

When the tech heavyweights stepped up to fight nearly ten years ago, they were substantially leaner in almost every measurable category. Market caps were deflated following a bloody bear bath; earnings were paltry and, in many cases, non-existent; and influence on Main Street, Wall Street and Capitol Hill were meaningful but not, by any means, overwhelming. In comparison to where many tech companies started at the turn of the millennium, the place from which they began their ascent in 2009 was more of a perch than a podium.

Now, almost ten years later, the heavyweights are far beefier, having made significant gains across the board. Consider, for example, the top 10 publicly traded stocks by market capitalization at the beginning of 2009. Microsoft was the only tech stalwart on the list. But oh, how times have changed. At the end of the first quarter of 2019, seven out of ten on the list were tech companies (identified by an asterisk in the chart below). 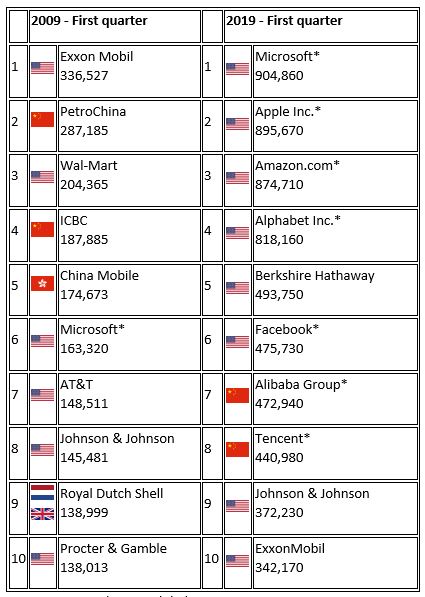 However, on Monday of this week, news broke that the Department of Justice (DOJ) and Federal Trade Commission (FTC) have taken steps to launch antitrust investigations into many of these tech giants. The carnage on Wall Street was anything but comforting to perma-tech-bulls, as all of these stocks – along with a broader group of tech stocks in the Nasdaq – took a proverbial beating. And while many of these same securities rebounded the following day, the announcement sent shivers down the spines of everyone from Silicon Valley to Wall Street – and rightfully so.

More Than Regulation
At the beginning of November 2018, we forewarned that increased tech regulation could be coming down the pike, largely due to a leftward lunge in last year’s mid-term elections. Monday’s announcement validated this prediction, while also leaving the door open for a much broader series of “reforms”. And while this assertion isn’t exactly a new revelation, consider, for a minute, how markets reacted over the past six weeks to two different, but related, stories.

The first story broke six weeks ago when Facebook announced that it would accept a charge of $5 billion for an FTC fine related to its role in the Cambridge Analytica scandal. The result? Facebook’s stock jumped 6% to its highest point in nine months.

What’s significant about this is how Wall Street viewed the two stories.

On one hand, it viewed the Facebook fine as a continuation of what investors have grown used to: a slap on the wrist for Big Tech and Washington punting on important technology issues. However, it viewed the DOJ and FTC announcement entirely differently: a sign that Washington will be taking major steps to reign in the unwieldy power of Silicon Valley.

Two Parties, Separate Issues, Same Result?
Democrats and Republicans don’t agree on much these days, and their stance on Big Tech is no exception. Generally speaking, Democrats find issue with the fact that Big Tech has too much power, that it uses that power to hurt small businesses and tilt the playing field in its favor. Republicans, on the other hand, claim that Big Tech is overrun by liberals who use their power to censor conservative viewpoints.

The nightmare scenario for Silicon Valley is that the upcoming presidential election becomes a platform for debating who will take a harder line on reigning in the tech industry. And while signs of a tougher stance on tech are a long way from formal charges, the building momentum towards broad reform should raise red flags for both Wall Street and Silicon Valley that change is imminent – at least to some degree.

The degree to which this change takes hold is still up for debate in the public discourse; but what Monday’s story and subsequent sell-off shows us is that Big Tech is not invincible, infallible, or unshakeable. It is subject to oversight, regulation and, possibly, broad reform that has the potential to upend ten years of unparalleled performance.

Based on how reliant the US stock market has been on both tech earnings and share price appreciation, investors would be wise not to treat this development too cavalierly—even though cavalier has been a winning mindset for most of the past decade. To paraphrase that irritating post-script, past attitudes are no guarantee of future results.