“The central issue is that the degree of government expenditure growth, largely entitlements, is destabilizing the financial system.”
-Former Fed Chairman ALAN GREENSPAN, from a February 2017 interview

Well, they did it. The gang that couldn’t legislate straight managed to get their tax bill passed before year-end. Despite the GOP controlling all three elected arms of government, it wasn’t pretty to watch. In fact, by comparison, sausage-making looks like a pristine process.

In future EVAs, we plan to address the changes and ramifications after more time for examination and reflection. Right now, we are still scratching our heads about the pros and cons and I suspect many of you are, as well. If so, you are far from alone. The Wall Street Journal reported this week that the new tax bill even perplexes the experts.

What is clear, though, is that many US corporations will benefit from the dramatic reduction in the highest income tax rate from 35% to 21% (though individuals will actually receive a larger reduction in terms of dollars). There should also be a boost from those handful of entities with massive sums of overseas profits (though, as noted in our December 8 EVA, much of this trove is already held in domestic securities, mostly US treasuries). The reality is that the bulk of the $2 trillion or so that is pending repatriation at the new 15% rate is held by a few mega-cap tech and Big Pharma companies.

On the other hand, it’s important to realize that a large number of America’s most important businesses are already paying an effective tax rate close to the new levy. This is due to all the games they have played to reduce their taxes using the copious quantity of corporate loopholes. Yet, many corporations, such as the big telcos and a wide array of financial entities, will see significant relief. And, as also mentioned before in these pages, small caps are supposedly big winners despite that about one-third of them are unprofitable. Overall, we’ve seen estimates of an earnings boost next year of 5% to 10%, at least for the S&P 500.

Consequently, there is no doubt this is positive for the US stock market. What is uncertain is how much this will drive share prices from here considering the number of times rumors of the bill’s passage caused stocks to rally since Mr. Trump was elected.

Another clear benefit is the 100% deductibility for capital spending over the next five years. This is a considerable amping up of the previous 50% rate. Logically, this should spur cap ex which was already showing signs of life after a multi-year downward trend. Long-term, it’s reasonable to expect this to improve productivity which has been in a coincident bear market (there’s a tight linkage, over time, between higher investments and rising productivity).

So, all in all, the new bill appears to be a bullish development for US companies. This is despite its well-publicized flaws (the biggest being what it does to future deficits which were already poised to surge).

The impact on individuals is more of a mixed bag from what we can tell at this point. Lots of deductions are being reduced or eliminated (thus, it may make sense to prepay some items, if possible, before year-end). Offsetting that negative, the highest rate is being reduced and the level at which it kicks in is being raised as well, from $471,000 to $600,000 for married couples filing jointly. Middle- to lower-income taxpayers will also see a reduction in their tax rates in most instances. However, in the case of certain high-income individuals, especially those who are subject to lofty state income taxes, they may actually see an increase in how much of their income they are privileged to share with the IRS (see item 2 below).

The below is our best effort to summarize some of the key aspects as far as individuals are concerned, besides those mentioned above:

(Disclosure: While we do our best to understand the implications of the tax bill from an investment standpoint, we are in no way tax professionals. Any questions related to the tax bill, or how it may impact you, should be directed to your CPA.)

(It is important to note that most of the personal “perks” sunset at the end of 2025. Any bets that the deductions stay eliminated and the rates eventually rise?)

In our minds, besides the budget blow-out this reform renders likely, it is also disappointing that the much-advertised benefit of simplification somehow wound up on the cutting room floor. This baby certainly is no threat to the job security of CPAs!

Further, per a most impressive overview from J.P. Morgan, prior tax cuts did not “pay for themselves.” It’s highly unusual to have a tax cut of this magnitude when Federal debt levels are this elevated (they are literally double, as a percentage of GDP, of what they were when prior tax reductions occurred). Moreover, the deficit is already increasing, which is also extremely odd when the economy is supposedly humming along. Finally, even on a percentage basis (i.e., not dollar-based), the top 5% of taxpayers are getting the greatest benefits. Somehow, we think this is likely to be a major issue in the mid-term election campaigns that will be cranking up soon.

Ok, enough on taxes (I never did like those things, anyways). We’re now going to offer a holiday treat to our loyal readers, thanks to my close friend Grant Williams who has, on several occasions, punished himself by interviewing me on his wildly popular Real Vision TV (RVTV). Despite that, he still likes me.

This week, he was kind enough to let us run one of his most recent TTMYGH newsletters (which are also very popular, particularly with investment professionals around the world). Grant’s letter is meant to be a companion piece to last week’s maiden voyage of our new Bubble Watch EVA series. As you will soon read, it’s not just your aging EVA scribe who believes there is definitely something rotten in Denmark—where they have negative interest rates despite a healthy economy and ripping real estate prices—but in a lot of other countries, as well.

* Editor’s Note: While we are linking to Grant’s full 49-page missive for your reading pleasure, we recognize that the full article might be overwhelming for many of our readers. As such, please focus on pages 3-16 for a continuation of last week’s Bubble Watch EVA theme.

One eagle-eyed EVA reader correctly pointed out that I erroneously referred to the below chart as relating to the S&P 500. As was--and is--footnoted, it’s actually a monthly return chart for the MSCI All-World Index. In other words, it shows that global markets rose each month during 2017 (with December being a lock for another up month at this point). When you think about it, that’s even more extraordinary. However, the S&P 500 also rose each and every month this year which, as never done in the past. 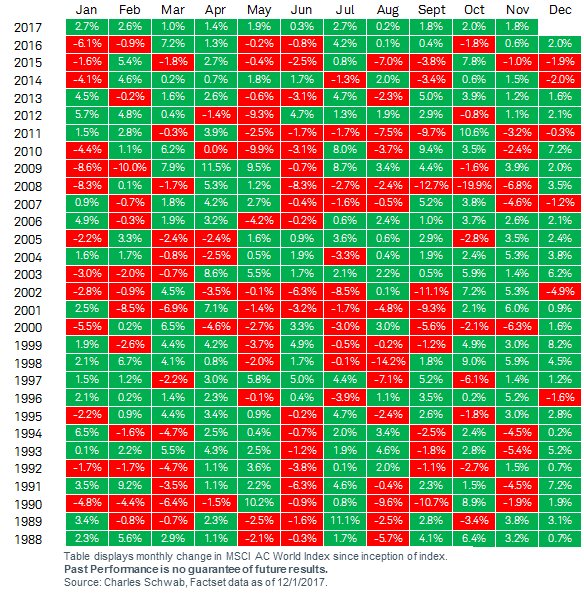