“The aggressiveness of our accommodative policy may soon backfire on us if we
don’t begin to gradually reverse course.”
- Philadelphia Fed President, CHARLES PROSSER, referring to the Federal Reserve’s government bond buying program.

1. A few years ago, the US economy was artificially stimulated by hundreds of billions of home
equity withdrawals, the infamous “house as ATM” phenomenon. Indicating how radically consumer
behavior has changed, roughly one-third of current refinancings are so-called “cash-in refi’s” where
mortgage balances are actually reduced.

2. Credit Suisse strategist Doug Cliggott has observed that in each of the last two quarters of 2010 stocks gained 10%. To demonstrate how remarkable this is, only 16 quarters in the last 30 years have registered double-digit increases. 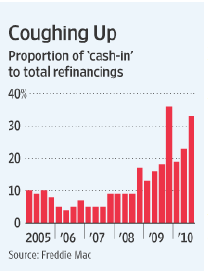 3. A recent article in The Economist cited another chink in the once sacred efficient market hypothesis. It discussed numerous studies showing a “momentum effect” where the strongest stocks of the past year collectively outperform in the next 12 months. Three to five years out, however, this phenomenon tends to dramatically invert.

4. Numerous past EVAs have focused on the collapse of money velocity in the US. In addition to
this, the money supply itself remains extremely subdued. Both of these vital factors argue against
any meaningful inflation acceleration. 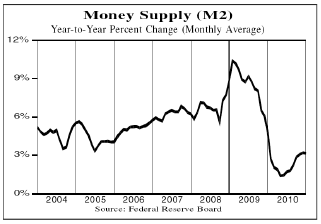 5. Another recurring EVA theme has been the understating of the US savings rate, and the same questionable accounting may apply to our trade deficit. According to a recent Wall Street Journal article, balance of trade number-crunching assumes that a good’s entire value is attributable to the final exporting country, even if it provides nominal content.

6. Illustrating this distortion, although Apple’s iPhone is shipped from China, just $6.50 of its $179 wholesale price is sourced there. The iPhone alone supposedly contributed $2 billion to the 2009 US trade shortfall with China notwithstanding that, based on the actual cost of assembly, the addition to the bilateral deficit was just $73 million.

7. The cumulative inflation increase since January 2007 in developing countries versus Europe and the US is already sizable. In addition to threatening the global recovery, the 6% drops early this year in Indian and Indonesian stocks are being attributed to inflation pressures. 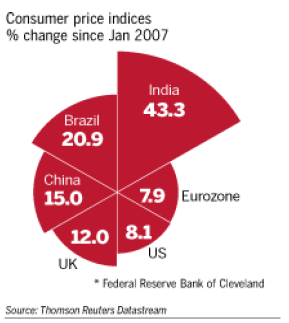 8. An epic event occurred last week when the cost of insuring against government bond defaults in Western Europe exceeded that of buying protection on sovereign debt from Eastern Europe, Africa, and the Middle East.

9. California’s share of the nation’s population soared from 2.5% in 1910 to 12% by 1990. Yet, possibly due to its notoriously high tax structure, over the last two decades its population actually shrank, with two million Californians leaving the Golden State.

10. One of the odder developments of the recent commodity price surge has been the pronounced drop-off in the Baltic Dry Index. This measure tracks shipping costs and activity for most bulk goods and it is generally closely correlated with commodity prices.

11. The Japanese yen remains almost inexplicably near an all-time high versus the US dollar despite Japan’s continued pursuit of fiscal policies that recently prompted the Wall Street Journal to refer to it as the Italy of Asia. Its fiscal 2011 budget projects that debt service costs will consume over 50% of all tax revenue even with very low interest rates.

12. After initial euphoria over the recent ADP payroll survey, a definite letdown occurred last week when the government’s official unemployment report showed the addition of just 100,000 new jobs versus expectations of 150,000. However, October and November hirings were revised up by a combined 70,000.

13. The Economist recently noted that China is dealing with a situation that could be known as “profitless prosperity.” Despite revenue growth approaching 40% over the prior year, profit margins continue to contract. This is the antithesis of the situation seen in the US where top-line growth has been modest but profits have soared. 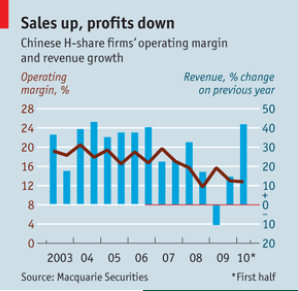 This report is for informational purposes only and does not constitute a solicitation or an offer to buy or sell any securities mentioned herein. This material has been prepared or is distributed solely for informational purposes only and is not a solicitation or an offer to buy any security or instrument or to participate in any trading strategy. All of the recommendations and assumptions included in this presentation are based upon current market conditions as of the date of this presentation and are subject to change. Past performance is no guarantee of future results. All investments involve risk including the loss of principal. All material presented is compiled from sources believed to be reliable, but accuracy cannot be guaranteed. Information contained in this report has been obtained from sources believed to be reliable, Evergreen Capital Management LLC makes no representation as to its accuracy or completeness, except with respect to the Disclosure Section of the report. Any opinions expressed herein reflect our judgment as of the date of the materials and are subject to change without notice. The securities discussed in this report may not be suitable for all investors and are not intended as recommendations of particular securities, financial instruments or strategies to particular clients. Investors must make their own investment decisions based on their financial situations and investment objectives.