“The current IPO craze is starting to look a lot like 1999.”
– Bloomberg

“Investors had come to believe that the coronavirus would have long-lasting effects, particularly on technology companies [but] there is a reality of how important [these companies] have become to the world.”
– Jeffrey Bunzel, head of equity capital markets at Deutsche Bank

Over the past two years, we have penned two separate letters highlighting some of the most high-profile Initial Public Offerings (IPOs) to hit markets. During that time, many of the companies we’ve discussed have had blockbuster performances, turning from promising unicorns, to high-flying publicly traded companies and ascending well beyond their list price over a very short period of time. Other businesses we have mentioned, such as Ant Group and WeWork, stumbled and faceplanted before crossing the finish line, gaining considerable notoriety for their failed IPO attempts. And yet others have had mixed returns, surging at times, while deflating at other points.

What’s undeniable is that after a slow start to 2020, the IPO market turned into a full-on craze towards the end of last year, as many retail investors clamored to get into promising names early (early in their public debuts, that is). This euphoria and extreme case of FOMO (fear of missing out) pushed already high valuations sky-high, leaving many fortunate investors sitting on dizzying returns. The Renaissance IPO ETF, which invests in companies that have gone public over the last two years, hit an all-time high at the end of December, rising 224.3% since its low point in mid-March. 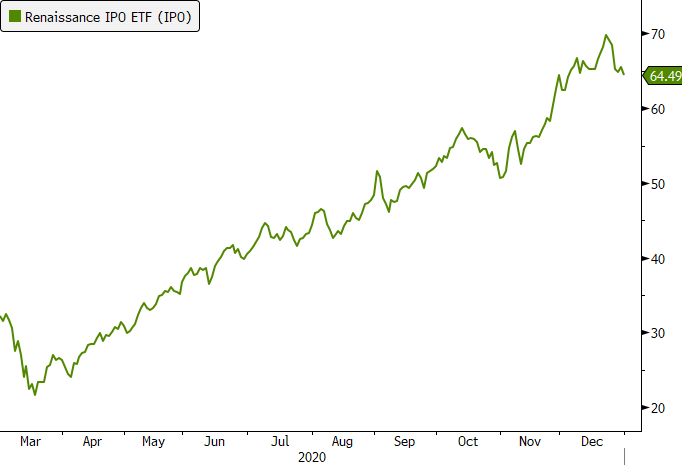 Similarly, the Nasdaq 100, an index made up of some of tech’s most notable names, has doubled over the past two years and is trading at a price-to-earnings valuation multiple last seen in 2004. 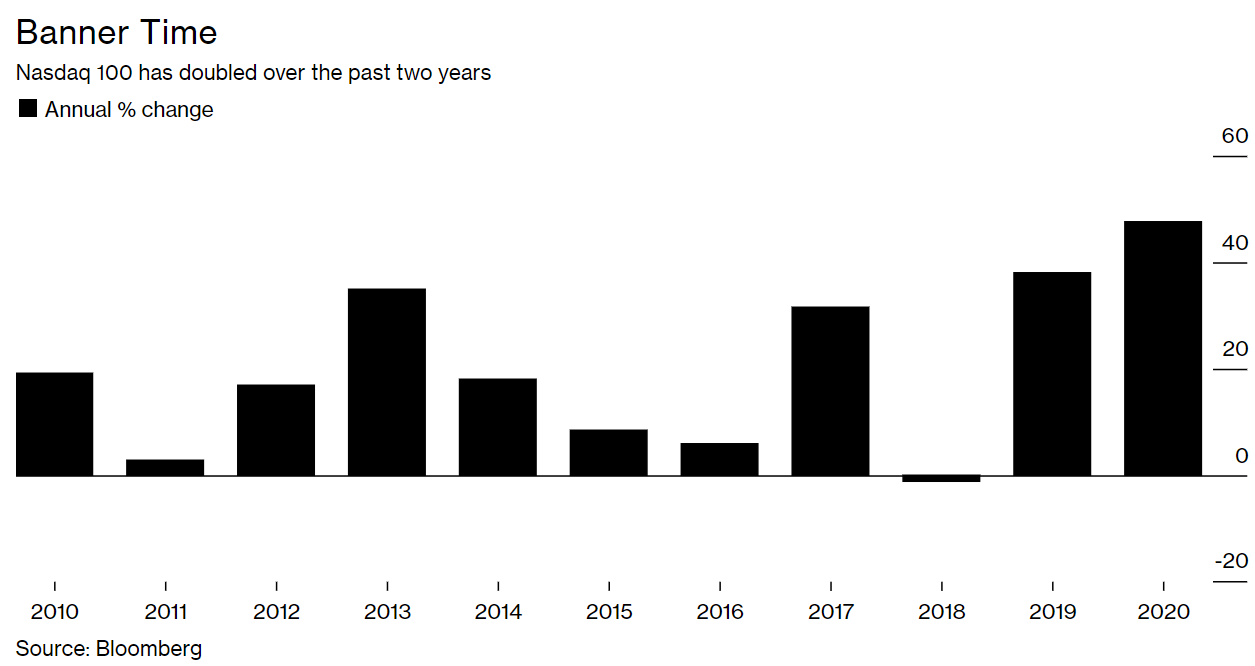 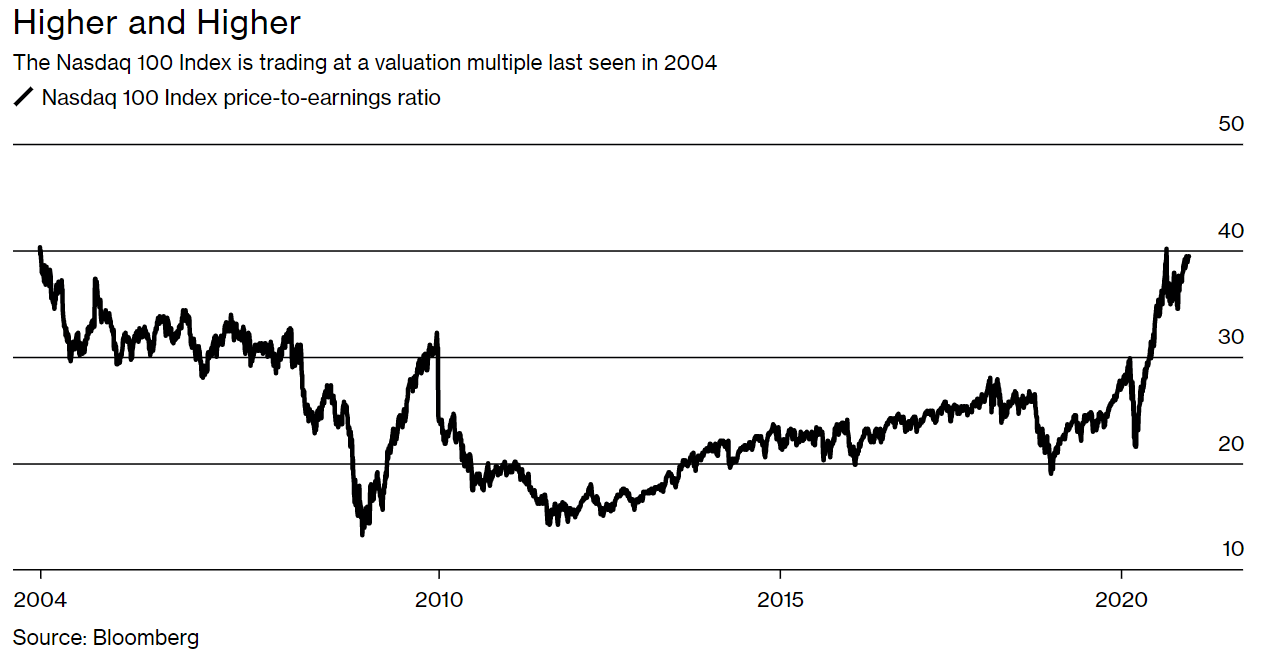 These trends have raised eyebrows amongst veteran investors who are beginning to see shades of past bubbles. Marshall Front, the chief investment officer at Front Barnett Associates, recently stated, “As speculative juices flow, people become more entrenched with opportunities to make a quick buck. That could be dangerous. You never know how long the party goes, but it doesn’t end well.” In a similar vein, Peter Cecchini, founder of AlphaOmega Advisors LLC, said, “Are there areas of the market that are in a bubble? Yeah, clearly. Many of those are obviously speculative technology companies.”

On the flipside, retail investors and advocates of a continued IPO surge justify the craze by pointing to how important many of these companies have become to the global and digital economy. To that point, Jeffrey Bunzel, head of equity capital markets at Deutsche Bank, said “investors had come to believe that the coronavirus would have long-lasting effects, particularly on technology companies [but] there is a reality of how important [these companies] have become to the world.”

This demand resulted in a banner year for newly minted public companies, which raised more money through stock market listings in 2020 than in any year besides 2007. In fact, businesses raised almost $300 billion through initial public offerings globally in 2020, including a record $159 billion in the United States.

The question for investors becomes, how long will the party last and how will it end? With the wind at their back, will fresh tech securities continue to go postal, rewarding investors who seem to be ignoring traditional valuation metrics and betting on the long-term growth of these companies? Or will the euphoria fade – as it did during the dotcom bubble and original Bitcoin bonanza of 2017 – leaving many investors on the sideline licking their wounds?

Whichever way the party ends, for now it seems that the IPO craze will continue to rage on in 2021, as neither a pandemic, nor a blue wave, nor a riot on Capitol Hill, nor an impeachment have dampened unphased investors’ animal spirits. Case in point: Affirm, an online payments company, began trading on the Nasdaq this week. The company priced its shares at $49 apiece (above its target range of $41 to $44), and the stock popped nearly 100% in its first day of trading, closing at $97.24 per share. Further, with yet another wave of stimulus expected once President-elect Joe Biden takes office, it’s very possible (and even probable) that much of the newly minted cash will end up in the red-hot market – especially the most speculative parts of it.

Similar to our articles from 2019 and 2020 titled, “Chasing Unicorns: IPOs to Watch in 2019” and “Chasing Unicorns: IPOs to Watch in 2020” we have provided details below on five unicorns that are expected to join public markets by way of IPO or direct listing in 2021. This list is in no way an endorsement of these companies, but they are nevertheless worth watching as the IPO market takes off this year.

DISCLOSURE: Securities highlighted or discussed in this communication are mentioned for illustrative purposes only and are not a recommendation for these securities. Evergreen actively manages client portfolios and securities discussed in this communication may or may not be held in such portfolios at any given time. Please see important disclosure following this article.

IPOs and Direct Listings to Watch in 2021

Primary Business Offering: Coinbase is an online platform that allows merchants, consumers, and traders to transact in digital currency. It lets its users to create their own wallets and buy or sell digital currencies, including bitcoin and ethereum.

Reason it’s worth watching: Coinbase will be the first major U.S. cryptocurrency exchange to go public. The cryptocurrency space has seen mixed news recently, with bitcoin (the most popular digital currency) surging of late. On the flipside, Ripple was recently sued by the SEC, which sent shockwaves through the industry and led Coinbase (and other cryptocurrency exchanges) to halt the trading of XRP (Ripple’s digital token) on its platform – pointing to the potential for broader industry regulation.

Primary Business Offering: Roblox is an online gaming and entertainment platform offering a shared digital experience that brings people together through play.

Reason it’s worth watching: If you have a young child, you’ve likely heard of Roblox. The company has seen stellar success and, in the first nine months of 2020, had an active daily user count of 31.1M, up 82% year-over-year. Revenue through the first nine months of 2020 was $588.7M (up 68% year-over-year) and third quarter revenue was up 91% year-over-year. The company was expected to go public at the end of 2020, targeting an $8B valuation, but pulled its offering due to the success of fellow unicorns, Airbnb and DoorDash. In a very telling sign of the times, the company instead raised $520M at a $29.5B valuation in private markets four weeks later. The company has thwarted the traditional IPO and will instead reach public markets by way of a direct listing in early 2021. It will be interesting to see if the securities go postal or pull-back once they hit public markets, after nearly quadrupling their market cap in less than a month.

Reason it’s worth watching: During the heat of the Covid-19 pandemic, Compass laid off 15% of its staff. However, thanks to a frenzied real estate market, the company reported record revenue in June, July, and August of 2020. With the real estate and IPO markets sizzling, the company filed to go public this week and will look to strike while the iron is hot in 2021.

Last Private Funding Round: According to Bloomberg, Robinhood’s last valuation was $11.2 billion.

Reason it’s worth watching: Popular among millennials, Robinhood was the first major brokerage service to offer commission-free trading. However, over the past couple of years, the company has experienced several platform outages, controversies, and many brokerages have matched its commission-free value proposition. In a unique move, Robinhood is reportedly considering selling its shares directly to its users if it opts to IPO. The question is whether its initial adoption and cult following will be enough to sustain its long-term success.